Flowers for my Life 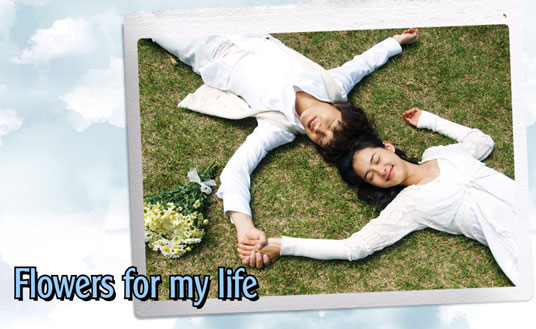 For KBS Wallpaper from this drama : http://www.kbs.co.kr/drama/flower/enjoy/paper/paper/html

For KBS Photo Gallery from this drama : http://www.kbs.co.kr/drama/flower/enjoy/photo/photo.html

This is the first in approximately three years after the 'Prince's First Love' which completed its broadcast in August of 2004 on MBC. His last KBS appearance was through 'Star' ten years ago.'I Came in Search of a flower (tentative)' which will be aired following 'Hello, Miss,' is about finding the true meaning behind love and death. Producer Ji Young Soo of 'Oh! Pil Seung, Bong Soon Young' will be joined by writer Yoon Sung Hee of 'Shooting for the Stars' for the series.

Cha Tae Hyun will be playing Yoon Ho Sang, a comical undertaker. He has a nice personality and looks but seems to end up with luck in whatever he attempts and believes all of it is because of money.

Cha Tae Hyun commented, "I am very concerned as I haven't appeared on television in a while, but I am looking forward to this piece. I will try my best to present a lively character the viewers can get into."

Na hana loves money more than anything. she left her home town for seoul. She decided that the only way she could be with money is to marry a rich man who will die soon. She soon meets yoon ho sang, a young man who is a poor, troublemaker, and also loves money, but is in diguise of a very rich man who died. these two meet and soon love sparks but yoon ho sang has a serious cancer problem which he first lied to a man who he owes money to.

as Yoon Ho-sang: Living in a human, manly way! What's the meaning of life? Don't say it's in alcohol and friends. I lost everything after I got drunk and agreed to give security for a friend of mine who wanted to get a loan. I've lost that friend and now all I have to worry about is how to pay my credit card debt. I've become everybody's enemy. But deep inside I'm a very social person with a good sense of humor. We only live once... I should start living as a human from now on...

as Na Hana: The purpose of my life is to correct my destiny by meeting a rich guy who will not live long. There are two things I know for sure in this world: money and myself. I adore money, and I'm selfish. Not to say that I'm pretty or well-shaped.. I'm just an egoist. I never care about others  only about my own self. I always make sure to achieve my goals once I make up my mind to do something. I keep trying until I finally get it. If you put it in a good way - I'm brave and determined; if you put it in a bad way  I'm stupid and spiteful.

as Ko Eun-tak: I'm a lucky guy. I was born in an affluent family. Who am I waiting for? Can I say that it has been worth waiting? I am a funeral assistant of Hana's family and an aspiring doctor who knows a lot. On the outside I look like a blessed guy: I'm smart and lucky and I've achieved a lot without applying much effort. The only pitfall is that my mother remarried when I was young, so I was raised by my stepfather. Nobody knows how I have lived so far and where I came from.

Flowers for my Life trailer