First Love of a Royal Prince 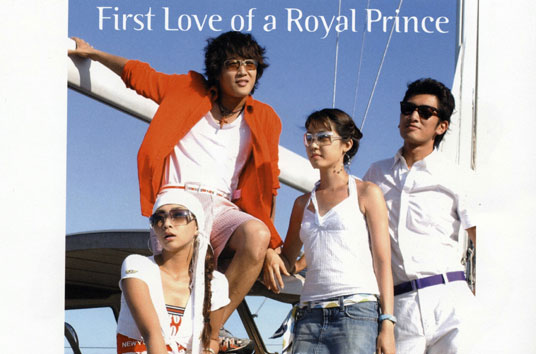 For MBC Photo Gallery from this drama : Click here

There's the first royal prince, the son of a millionaire who knows nothing but money and thinks the world revolves around him. The second royal prince is Mr. Perfect who only cares and goes after his success and accomplishment. And between these two comes along a penniless girl who's nothing much of a kind but only full of faults except that she has a huge jolly heart and passion for life. Set in the world-renowned beautiful places and resorts, "First Love of a Royal Prince" takes a look at these three young people's story of finding their dream, true happiness as well as their true love. Numbers of exotic places like the stunning blue sea of South Pacific and the ever so white snow field of Sapporo(Japan) will spread before your very eyes.

Kim Yoo-Bin (Acted by Sung, Yoo-Ri) A recreation major graduate of a two-year college, she now works a part-time job at a sandwich shop and delivers sandwiches. She has been just strolling along for 3 years without a stable job but she has one huge jolly heart and great passions for life. She's got one dream and that is to work as the G.O at an overseas resort. But of course, her present situation is not that favorable to her and her dream seems just too far way from the harsh reality she's in. Her mother's endless preaching at home has also been added to her routine but that's not enough to make this girl miserable. Because to her, "Life is meant to be happy!".

Choi, Gun-Hee (Acted by Cha, Tae-Hyun) He is the royal prince of a hotel/resort millionaire, heir to the great numbers of resorts and hotels around the world. He graduated from some college in the United States and lived there for quite some time but he still can't speak English. He's just living the carefree and comfortable life of a royal prince and merely waiting for the day when he'd take over his father's business. He has always been economically well off but his mother's early death and his father's negligence made him the way he is now. He's never been really loved by anyone, much less his family so he doesn't know how to really get along with people, not to mention to love. He only hangs out with the rich friends and looks down on whoever he thinks are inferior to him. But one day a girl named Yoo-Bin comes storming into his life and he feels himself changing a bit, at least in front of her.

Cha, Seung-Hyun (Acted by Kim, Nam-Jin) He's also the royal prince. He's the eldest son of a hotel/resort millionaire, in fact the elder brother of Gun-Hee but he's totally unaware of his birth secret. He lives with his single mother and in order to meet her every expectation, he is always trying his utmost to be the very best. Ever since he was little, he has been going after only one thing, to be the most important and competent person in Korean economy. He has entered only the most prestigious schools, got himself into the number one company in Korea and boasted the fastest promotion in history. But this Mr. Perfect also goes through some changes and again Yoo-Bin seems to lie behind all this.

Lee, Hye-Mi (Acted by Jin, Jae-Young) She is a new face star in Korea and a girl friend of royal prince, Gun-Hee. She has been longing for his wealth and glory but hated Gun-Hee's arrogant attitude and bad manner even though she is in love with him. Hye-Mi is like a fox, which doesn't endure to lose anything or to have any damage. One day, there appears Yoo-Bin in front of Gun-Hee and he is very attracted by her whom doesn't have anything and clumsy and also stupid. Thus, she feels very nervous of Yoo-Bin all the time and worries about their relationship. Though cold and ferocious, she is eager for being loved from others as she was grown up so lonely in childhood.