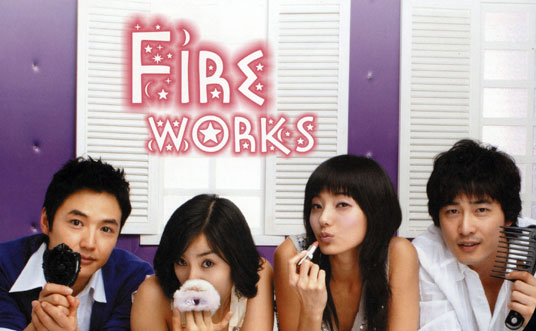 For MBC Wallpaper from this drama : http://www.imbc.com/broad/tv/drama/firework/wallpaper/index.html

For MBC Photo Gallery from this drama : http://www.imbc.com/broad/tv/drama/firework/photo/index.html

They say that our country's youth unemployment figure has reached 300 million.Why do you think people say that a great portion of the youth in their twenties is unemployed?

The main character of this drama is Shin Nah-rah, a girl approaching thirty who doesn't have a house, money, a boyfriend, a job, or anyone to support her. All she has are her brains. After living unemployed for a while and struggling to make a living she thinks about getting married because then she can at least work as a housewife. After she gets dumped by her boyfriend, who she was planning on getting married to and living together with, she goes out to find the woman who stole his heart; but while at this woman’s cosmetic company an ad for a sales clerk catches her eye. Having nothing to lose she fakes being her 20 year old little sister, a high school graduate, and starts working as a sales clerk at the company. At work she meets an immature and spoiled guy likes the woman who stole her boyfriend’s heart. The two always snarl at each other and get into disputes but this guy later turns out to be an employer who came into the company to work only because his mother is the vice president of the company; in other words he is the son of a really rich family! A love story starts to grow between the employer who knows nothing except being tough and an employee who knows a lot more than her boss throughout all their disputes and quarrels.

Through a fun, exciting, and exhilarating story about a woman in her marital age getting a job to get back the man she loves we will be able to see how women in the year 2006 live through and fight to succeed in today’s society. This story about a woman who meets a man in the process and their ensuing love story goes back and forth between making you laugh and causing you to cry.

She works hard at everything she does, believing in her motto 'If you try hard enough, you can accomplish anything.' She has very high self-esteem, is very stubborn, tactless but also very honest. She thinks herself to be somewhat intelligent, but she is only strong in theory; when it comes down to actually getting the job done she is boundlessly clumsy. Once someone triggers her buttons, however, she becomes a stubborn fireball.She went into business school with belief in her father's words 'There are a lot of things to do in the world.' She dreamed of being a perfect and successful career woman so when all the other girls were busy going out to meet guys she studied very hard and got good grades. She also studied English very hard. The year she became a senior her boyfriend and she were studying to get a job but one day he lost all his rent betting on a game of pool, so she took him into her house and they have lived together ever since. In time he, Seung-woo, passed his CPA exams thanks largely to her hard work in encouraging him to succeed but now she is without a job and even farther away from her dream. She starts wanting to compromise by getting married to Seung-woo, but like lightning he tells her that he has found his true love and dumps her. Unexpectedly she has become Shim Eun-ha from 'Chung Choon Ae Deut'. She ends up working as a beauty planner faking that she's just graduated from high school, determined to get Seung-woo back.

A former soccer player who is tough and a bit spoiled.He has a character somewhat similar to the soccer player Kim Nam-il, he is very manly yet rebellious. He has many other characteristics inside of him and is by nature very pure at heart. He grew up feeling deprived from his mother because she gave of all her love to his 'perfect' older brother. The only thing he was better at than his brother was soccer, which is why he became a soccer player. He didn’t like being below his brother. The person who actually made him notice that he was good at soccer was Mi-rae. Mi-rae, who always seemed like a tomboy, starts looking like a woman in In-jae's eyes and his heart starts to beat for her so he decides to confess his feelings towards her…but it's only after someone else has confessed to her first. This someone turns out to be his older brother, who has just passed his bar exams.And so Mi-rae became his brother's woman.His brother dies in a car accident the day after In-jae confessed to Mi-rae that he loved her.For 2 years he lives every day like a tramp, thinking that his brother died because of him. He lives by teaching soccer to kids, but there he meets a little boy named Bong-chang who reminds him of himself when he was young, and ends up working at his mother's company after he goes to borrow some money from her for Bong-chang’s hospital bills.

She is very intelligent, lady-like and is so stunning that she causes guys to do a double-take when they see her.She grows up like family with In-jae and his brother. She starts to like In-jae but he seem to always be mean to her and so she starts to think that he doesn't like her and becomes heartbroken when In-chang confesses his love for her so the two become lovers. But as time goes by her feelings for In-jae become even bigger and when In-chang starts to question her about In-jae's confession she also tells him her feelings towards In-jae...That day In-chang drives off in anger and gets into a car accident.She feels that she is the reason In-chang died but she finds her heart still beating for In-jae and doesn’t know what to do, so she tries to deny her feelings and goes looking for another guy to love. That very guy turns out to be Nah-rah's boyfriend Seung-woo. She doesn't love him but she wants to be in a relationship that is safer than her last one. She tries her best to be a good friend and sometimes even protects him like she was his sister-in-law.

Nah-rah’s college friend and ex-boyfriend, a cute couch potato.Compared to Nah-rah he lives a very easy life, and thanks to Nah-rah he has become a CPA. One day he goes on a business trip to San Francisco and there he meets Mi-rae. He worries and thinks about what to do about this love that came to him like lightning.Eventually he proposes to Nah-rah because of the burden he has been to her, but because she finds out about everything their relationship starts its downfall. After breaking up with Nah-rah, he starts planning a beautiful life with Mi-rae, but after finding out that Mi-rae loves In-jae his love towards Mi-rae comes to a bitter end and he suffers from being heartbroken.

After getting divorced from her husband she takes little In-jae on her back and works as a cosmetic saleswoman, working as best she could through the IMF, getting the highest sales record, and gets an unprecedented promotion to vice president. She is a true testament to the triumph of human strength.She wrote a novel; 'What Made Me So Big Was My 80% Poor Living' and appeared on various TV shows. She is the grand woman in the cosmetic business. (In-jae thinks that Mi-rae's mom was 80% his mother.) In real life she only graduated from middle school but everyone else thinks that she graduated from a very elite business graduate school, received a doctorate at Kazakhstan University, and some other degrees that are hard to confirm.Her real name is Park Oh-soon but she changed it to Park Jin-hwa, only In-jae calls her by her real name and every time she hears him call her by her real name she gets angry.She loved her son, who was good at everything he did, but was always cold to In-jae, who was a lot like his dad (who fell in love with another woman and left her). It’s not that she hated him, it’s just that there was something about him that she didn't appreciate.She feels sorry for Mi-rae for not seeing anyone for 3 years after her son’s death but after finding out her feelings towards In-jae she turns into a cold objector.

She is gorgeous and very down to earth. She always made fun of her intelligent sister and boasted about how she stuck to her beliefs and didn't go to college. She got pregnant right after she graduated from high school, so she got married at a very young age and now has a daughter.Her husband is serving his time in the army and is living in the apartment her well-off in-laws bought for them.She is dumbfounded when she finds out that her sister has gotten a job pretending that to be her but soon finds fun in the situation. She pretends to be Nah-rah's older sister, but sometimes puts Nah-rah into dangerous situations.

He is a former P.E. teacher, who believes that the world is big and there are a lot of things to do, but hasn't ever really succeeded. He buys some land on the west coast but later finds out that it was a fraud and loses all his retirement grants. After that he suffers from the grim realities of life, but continues to boast at his wife. His expectations for Nah-rah are sky-high.

She still likes to hear that she looks younger than her age.After her husband loses all his retirement grants she really starts to pick on him.She thinks that saying someone is very caring really means that they are good for nothing.After all the discord with her husband she comes up to Seoul, lives with Nah-kyung and works as a cosmetic saleswoman, but there she meets a woman who used to give her massages, Park Oh-soon.

She is ugly and blunt but has great pride in her job as a beauty counselor.Not knowing how old Nah-rah truly is she always scolds her and hits her.She is from a poor family and always wanted to go to college but was never gifted enough with her brains to study. Nah-rah, however, helps her study for the college entrance exams so the two become closer. As Nah-rah's mentor she helps her find her talents as a make-up artist but later starts to really notice Nah-rah’s talent.

She is pretty and compassionate, but pushy.She is interested in wealth, men, and looks. Her dream is to get married to a wealthy and good-looking man. She is fed up with Choon-ae's unbending character.

He is a former soccer player, after getting kicked out of the soccer association for his harsh tackles, he now works as a male beauty counselor and in In-jae’s company.Girls are always his main interest. He rages through the girls in the gallery starting with Nah-rah, Nah-kyung, Choon-ae and Ah-ra thinking that they all like him.