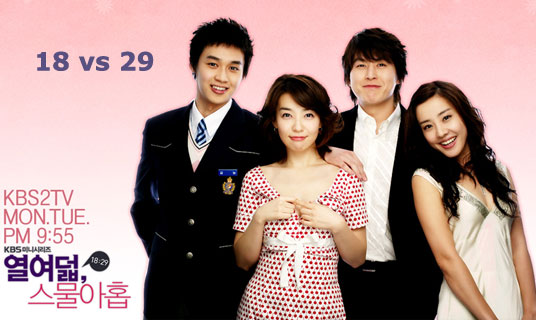 This drama takes the audience back to the 1990s. The main character of the drama, Yoo Hye-chan, 29, reverts mentally to an 18-year-old girl after having a car accident. As she recovers her memory and the relationship with her husband, Kang Sang-yeong, she goes through many hilarious and heart-moving moments. Hye-chan, who was a beauty queen in high school, marries her former classmate Kang Bong-man. In 2005, she turns 29. But after a fierce fight with her husband, she heads to court to file for divorce, unable to control her rage anymore. On her way to court, her car clashes with a truck, and as a result she develops amnesia. She only remembers herself as a senior high schooler, when she was sassy and outgoing, and popular with her peers. As her memory reverts to her adolescent years, she suddenly becomes crazy about the dance group "Seo Tae Ji and Kids," which was popular with teenagers back in the ‘90s. While looking strong on the surface, deep inside she is soft-hearted and feeble. She likes Jane Campion's movie "Piano" a lot. Although Kang Bong-man, nicknamed "Ice Prince," is the ideal of every girl in Hye-chan's school, she regards him as shallow. The guy she really likes is her senior, Jeong Shi-woo. But in reality, Hye-chan's husband is Kang Bong-man, whom she despised so much in high school. He changes his name to Kang Sang-yeong when he becomes an actor. In the latter part of the drama, Hye-chan recovers her memory and pursues her dream of becoming a film director. When Hye-chan loses her memory, Sang-yeong becomes preoccupied with mending their shattered relationship. He collects all the messages they had exchanged in the past to help her remember who he is. The replays of Hye-chan's memories, which are presented in diverse ways, add to the drama's tantalizing plot.

Hye-chan is a 29-year-old housewife. The plagued relationship with her husband, the "handsome king," spurs her to file for divorce. But on her way to court, she gets into a car accident, and when she wakes up she thinks she is 18. While physically she looks like a housewife in her late 20s, mentally she reverts to the age of 18. But as time goes by, she recovers her memory step by step.

When his wife asks for a divorce out of the blue, he agrees to it because it hurts him a great deal. But finding that his wife has amnesia after the car accident, he makes every effort to help her recover her memory and mend their relationship. He is one of the most sought-after commercial film models and a famous entertainer.

A top-rated actress, Ji-yeong falls for Hye-chan's husband, Kang Sang-yeong, one-sidedly, while Hye-chan acts like an 18-year-old girl as a result of her amnesia.

Nun is a high-school student who sincerely loves Hye-chan.
Eighteen vs Twenty-nine trailer