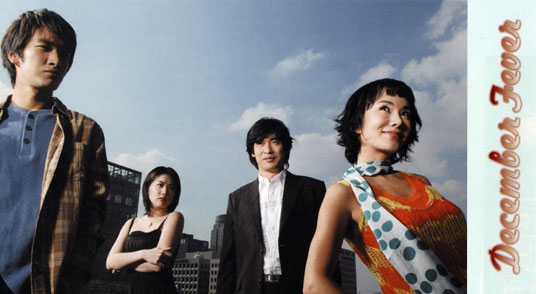 For MBC Photo Gallery from this drama :

A married woman who falls in love with another man, and the young man who tries to seduce her as well as the people who chase after them.December Fever is the story of a dangerous love affair between a married woman and a dying man. It introduces us to people with double standards and other falsehoods, as well as people who sacrifice themselves for family. In addition, it's a story of a father and his dying son as well as a tale about the conflicts between and their mothers-in-law.

It holds a mirror to everyday life with comic and interesting characters. Her Story – With a husband and children, she’s been both an excellent wife and a good daughter-in-law. But little by little she's becoming a 'bad girl'. Finally, a secret love affair she's been involved in is revealed. She’s not someone’s wife, mother or daughter-in-law anymore. Now, she's just an unfaithful woman. She gives up everything, even her own children, and runs away with her lover. No doubt about it, she's become a real bad one. But the man she gives up everything for now tells her that he’s never loved her.

He says that he made a bet and it had been just a game for him. It was simply his way of getting revenge on his first love, who had given him up for another man. She was just at the wrong place at the wrong time... His Story – He did his best. He tried hard. Not only does he have to pay for his sick father's hospital bill, but he also must take care of his troublemaking brother. He works hard to put aside money for his tuition, but again, he spends all his savings taking care of his family. He's taking time off from school where he's been a college student for years. However, he’s not discouraged, and tells himself not to give up. His girlfriend of 7 years is getting married with another man, a rich doctor. He feels miserable, but since he loves her, he begs her to come back to him. But it’s too late to change her mind.

She tells him that he doesn't have any future, and just like that, she's gone. He's 27 years old. He's young and has his whole life in front of him. He decides to become successful to prove to her that she had been wrong. He works harder, but he's afraid that she might be right after all. The problem is that nothing seems to be working in his life. And then on top of it all, he's diagnosed with cancer and given 3 months to live... He might actually die before his sick father does... He's angry and frustrated... He meets a woman. Having absolutely nothing to lose, he makes a bet with his friend. He's not going to sit around and wait until he dies. He doesn't want to sacrifice himself for other people anymore.

He decides to live his own life and enjoy it until the last moment. He thus starts a very dangerous game!A Human Drama that Reflects Many Facets of Life TV dramas generally focus on the love lives of their characters, but real life isn't always just about love. In real life, making a living is often more important than having that perfect lover, and problems with one's mother-in-law can lead to tremendous headaches. December Fever tries to overcome the obvious limits of unrealistic and monotonous soap operas while at the same time showing various aspects of life through interesting and unique characters. It introduces us to people with double standards and other falsehoods, as well as people who sacrifice themselves for family. In addition, it's a story of a father and his dying son as well as a tale about the conflicts between and their mothers-in-law. It holds a mirror to everyday life with comic and interesting characters.

She is a beautiful and intelligent girl with a positive attitude. She's haunted by many series of trouble and difficulties yet she overcomes them with the iron-strong will. One day a rebellion breaks out and this brings her separation from her father and even her mother's death.She enters the royal palace at the age of ten and she puts her heart and soul, finally becoming the best royal cook of her times. One day she falls into a conspiracy and is kicked out from the palace becoming a maidservant. But she doesn't stop here. She studies medicines and re-enters the palace, ultimately becoming the supreme royal physician and also becoming the first woman physician in history to serve the king.

While he was working at a city hall, he encounters Jang-Geum and helps her get a golden pheasant. And this puts him a serious trouble where he even risks his own life. He's an outstanding scholar who combines both learning and the martial arts. He is a learned man with both good looks and high intelligence. He is left a widower soon after marriage, and volunteers to be on night duty which naturally brings him close to Jang-Geum. Admiring Jang-Geum's wisdom and passion for learning, he helps her in many ways and falls in love with her. But his love for Jang-Geum also puts him in a lot of trouble.

She enters the royal palace with Jang-Geum and becomes her long-time rival. She is an arrogant girl burning with ambitions and uses her beauty as a bait. Despite the disparity in social standing, ever since she was little, she has loved Jung-Ho but her love is never returned. She competes with Jang-Geum to become the best royal cook.

He is the 11th king of Chosun Dynasty. He is a very gentle man but extremely irresolute and indecisive. He tries to reform the political system and meets Jang-Geum. He cherishes her warm-hearted nature and many talents. He later loves jang-Geum not as his physician but as a woman.