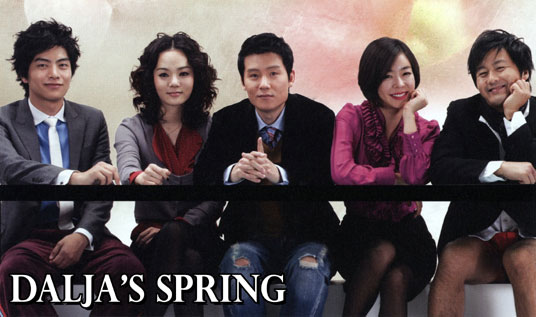 For KBS Wallpaper from this drama : http://www.kbs.co.kr/drama/dalja/report/paper/paper.html

For KBS Photo Gallery from this drama : http://www.kbs.co.kr/drama/dalja/report/photo/photo.html

'Dalja's Spring' is the story of Dalja, a 33-year old single at a crossroad of whether to remain single or get married before she gets older. The drama aims to comically and candidly portray the reality and undying pursuit of romance of a thirty something single woman.

The love triangle of Dalja, Taebong and Gijoong brews conflicts over love versus marriage. Taebong, a hunk six years younger than Dalja, works as substitute dates and becomes Dalja’s fake boyfriend. Gijoong is the type who dreams of an ideal and rational courtship. The drama also highlights the life and work of women in their thirties through Dalja who is a talented managing director at a home shopping channel.

Oh Dal-ja:33-year-old promising home shopping channel managing director. She owns a house and a car thanks to a career driven life. She’s interested in men but is a disaster on real dates. She's a professional in work but a novice in love. She begins a dreamy love affair with flirtatious coworker Shin Sedo but is enraged to find out about his infidelity. She hires a boyfriend by contract, Taebong, to seek revenge on Sedo.

Kang Tae-bong:27-year-old freelancer for a proxy dating agency. He begins to pretend as Dalja's boyfriend. It takes people time to discover his warm heart due to his outspoken character. He develops feelings for Dalja.

Yeom Gi-joong:36-year-old prospering businessman who heads an importing firm of foreign brand goods. He is polite and humble with reputable character. But he's very possessive and hates to lose. He asks Dalja to start a relationship with him as he thought she would be comfortable and not have high expectations on love. He is aghast at her elementary dating experience but grows attracted to her more and more.

Wi Seon-joo:33-year-old home shopping network show host. A former hot model, she disappeared from the public eye when she married at 29. She returns three years later as a divorcee. The talented show host, who can be fussy and particular, gets on Dalja's nerves. She is a dating genius who knows all dating rules there are and what not. Her skills shine in making Shin Sedo as her man.