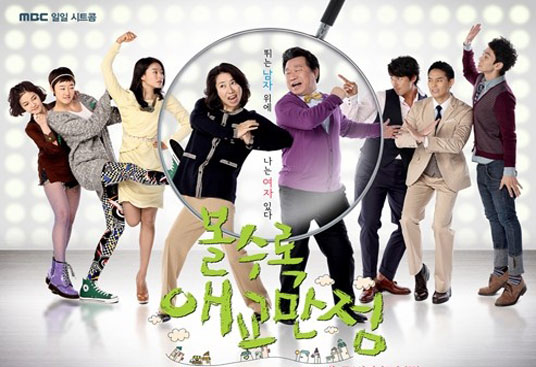 Also known as: More Charming by the Day

There's a flying woman above a running man! There is a fervent mother who raised her three daughters on her own after her husband left her. One day, the divorced man who moved in at the top floor of her building with his son decides to marry her eldest daughter. This is when her family's peace was shattered, but on top of all this, her husband who had walked out on her suddenly returns!

Her husband walked out on his family when his business went bankrupt. After he left, she spent 15 years running a hair salon and raising her three daughters alone. Ji-won, her eldest daughter, lived up to Ok-suk's expectations and became a doctor. Ok-suk thinks the world of her. But Ji-won becomes a widow not long after getting married and Ok-suk is worried sick about this. She has had no one to look after her while raising her daughters and has developed a quick and fast temper. She often cuts people off while talking and can even eat her meals standing up. Her best friend these days is her granddaughter. They get a kick out of badmouthing their neighbors.

After an unexpected bankruptcy, he leaves his wife Ok-suk and his three daughters for 15 years. He has the nerve to suddenly decide to come back, saying that he missed them.

He is immature and irresponsible, and is full of talk. He likes to bluff and when it seems that people aren't buying it, slyly changes his story. He likes to cover himself with, "I didn't mean it that way?" and tries to take advantage of any situation. He is the type who wriggles out of hard work, but still gets what he wants.

She is a doctor in charge of the obesity clinic below her house. Her husband died not long after her first marriage. She has a young daughter who is in elementary school. She is a good student, logical, and meticulous, but she lacks people skills and is a mama's girl. Ji-won does a 180 and breaks out of her shell after meeting Seong-soo, who is fun-loving and masculine. Until now, she has only gone to the academy her mother picked out, associated with friends that her mother liked, went to the college her mother preferred, and even married the man her mother selected. She goes against her mother's will for the first time after falling in love with Seong-soo, a stuntman. "Mom, I am going to marry this man!"

Ok-suk gave birth to Yeo-jin after drinking herbal tonics that were supposed to help her have a baby boy. This may explain why she is such a tomboy. She had a tough childhood, growing up between an older sister who was a stellar student, and a younger sister who was sly. But she is pretty laid-back and has no hard feelings despite her mother's differential treatment. She was a professional tennis player for a while but had to quit after an injury. Afterwards, she gave up going to college and is working as a nurse's aide at her sister's hospital. She has a crush on Yeong-gwang, her younger sister's friend but would rather die than to tell him about her feelings. She acts even more wildly in front of him. She already has a tough life, but she meets a man of her past that she had never wanted to see again at the hospital. Life just got more complicated.

A typical 20-something girl who is self-centered and likes money. She studies photography. She has to have everything go her way and treats her best friend Yeong-gwang like a slave. She isn't good at anything but hates to lose anyway.

Ji-won's daughter. She refuses to wear thermals when she goes outside because they're not fashionable and loves to dress up like a princess. But she dresses like a lazy bum at home.

A single father who lives at a studio room at the top of a building with his young son. He used to be a famous stuntman, with his rugged good looks and fast reflexes. But he starts to lose his status as he ages and becomes weaker. He knows the younger stuntmen are better than him. Nevertheless, he always keeps his chin up! He never worries about anything. He has swept Ji-won off her feet with his well-built body and simpleminded spirit, and the two are secretly seeing each other. They try to keep it a secret until they can get Ok-suk to like Seong-soo, but they get caught by a stupid mistake. Ok-suk is dead against their relationship! Seong-soo is willing to do anything to change her mind! Who will be the last person standing?

Seong-soo's son. He is only 11 years old but he takes after his father's rugged good looks, is a good student, and is a born leader. He is very popular amongst the girls in his class.

Ba-ni's advisor and a well renowned photographer. He is well-known in the U.S. as Gary Lee. He doesn't care if you are older or younger than him ? he will speak his mind. His students call him Satan and Ba-ni calls him Mr. Trash. He is obsessive compulsive and mysophobic and cannot stand messy environments. He always carries around his own spoon and chopsticks, and will not touch someone else's food. He is scared to drive after a serious accident and has Ba-ni drive him around. He uses Ba-ni as his graduate assistant but is constantly unhappy with the work she does. But Ba-ni is not the type to let people walk over her and the two of them fight every single day. One day, he suddenly can't get her out of his mind? Then he finds out that his brother, Yeong-gwang, has feelings for Ba-ni...

Ba-ni's best friend and Gyu-han's younger brother. He is a college student, majoring in computer science. He cares excessively about his body and his possessions. He is an early-adapter and loves buying new electronic products and is also quite fashionable. Thanks to his sense of fashion, girls flock around him. One might say that he just has a lot of pass around, or that he is a player. He is not on good terms with his irritable older brother, Gyu-han, who studied in the U.S. But Gyu-han suddenly announces that he wants to move in after coming back to Korea. So Yeong-gwang begins to live with his mysophobic brother as his roommate. Talk about hell on earth! He has been best friends with Ba-ni ever since they were little. But one day, he realizes that his brother may have feelings for her. How dare he ' she's mine!

He is a doctor working at Ji-won's obesity clinic. He is from a well-to-do family, is good-looking, tall, gentle, and honest. He is popular amongst women and the elderly alike. But he suffers from a "good boy" complex. He cares a great deal about what other people think about him. He always wants to be the good guy. He pushes himself to the extreme to maintain his perfect façade. At the hospital, he meets Yeo-jin who gave him a hard time when he used to be fat and begins to plan revenge.

A nurse at Tantan Clinic. Unlike her demure looking appearance, she is slow to understand situations. She always says, "No problem" but always does too little or too much than is needed. She's from a poor family and has very strong survival instincts. She has a great body and a pretty face, but guys just aren't attracted to her for some reason.