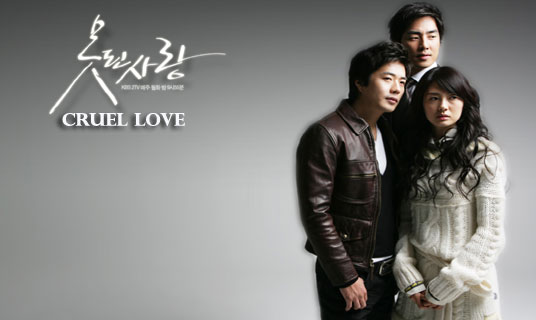 Na In Jung struggles with her love between the rather cold and rebellious Yong Ki and a successful businessman, Soo Hwan. Kang Yong Ki is a pop culture artist. He was separated from his first love, Jo Ann, and still carries the wound that he suffered from their relationship. His half sister is Joo Ran who is married to Soo Hwan. Soo Hwan begins an affair with In Jung but he only has ambition for the CEO position of Yong Ki's father's company. Soon after he discovers that his ambition does not fill the emptiness that he has inside and realizes he needs In Jung. But In Jung and Yong Ki have already fallen in love with each other. Will In Jung go back to her first love or stay with Yong Ki?

They say there is nothing else you could wish for as long as you are in love. But people tend to expect quite a lot from those they love. They say pride does not matter when you are in love, but many lovers break up because their self-esteem is hurt. They say love alone will do when you are in love, but we eventually keep turning our eyes to the demands of reality. They say love has no reasons, but people always love for a reason. Maybe that's why God bestowed love to humans as the biggest punishment for their greed. A bad and wicked love...

as Kang Yong-ki: A wayward guy who is an illegitimate son of a conglomerate owner and who never received love as a child. He becomes a pop artist, because art is the only way for him to express his feelings. He falls in love with another artist named Joanne but they break up due to her father's opposition, leaving Yong-ki devastated to the very bottom of his heart. While feeling guilty for the breakup, Yong-ki meets In-jung and after much bickering falls for her confident personality but their relationship is hampered by In-jung's first love, Su-hwan. Believing that his unhappiness is due to his kind heart, Yong-ki decides to protect his love by all means.

as Na In-jung: A beautiful and graceful cellist, In-jung stakes her everything on her first love, Su-hwan. She loves him even though she knows he is married but he coldheartedly breaks up with her. She does her best to get over him, believing that her suffering is a punishment for stealing another woman's husband. Five years later she meets Yong-ki, a sad-looking guy who keeps running into her. The two eventually fall in love but their relationship is shattered when Su-hwan shows up one day.

as Lee Su-hwan: Ambitious and eager to succeed, this man ties the knot with the daughter of a conglomerate owner to gain control of the company but their married life is miserable. To make things worse, he sees a rival in Yong-ki, the illegitimate son of his father-in-law. He falls in love with In-jung at first sight, but reality forces him to abandon her. However, he can never forget her for teaching him what genuine happiness and love is. He attempts to make her his woman again believing that he is the only one who can make her happy.