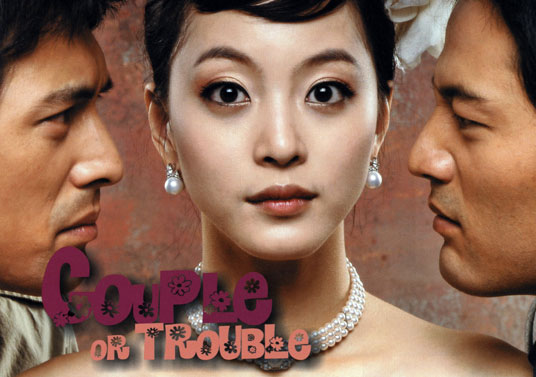 For MBC Wallpaper from this drama : http://imbc.com/broad/tv/drama/couple/wallpaper/

For MBC Photos from this drama : http://mmsmo.imbc.com/BbsList.asp?EvtDiv=374&CateDiv=1&CateSub=1


Amnesia becomes the culprit behind a drama of labor extortion under the pretext of love! Two people as different as night and day, who would never even cross paths under normal circumstances, come together in an outrageous situation and are eventually reborn as a fantastic couple.And the catalyst that brings about the entanglement of this unlikely couple? That most common of all common excuses: amnesia.Three out of every ten protagonists in TV drama shows suffer amnesia, and the heroine of Couple in Trouble is no exception.In this situation, the dashing hero ought naturally to rise to the occasion by taking her in and sheltering her from harm, but...Sorry, not this time.A clichd situation gets a thoroughly new makeover through the use of unique characters.A drama of labor extortion with the heroines memory as hostage.The singular storyline puts a twist on a hackneyed subject, providing fresh and provocative entertainment.

Cheol-su lives with the three children left behind by his late brother, who raised him like a father. He is the owner of Buheung E&C, a small-time construction company whose sign reads, 'General Construction, Architecture, and Interior Design Co.' In reality, his company handles such trivial and menial projects as building neighborhood fences, setting up plastic greenhouses, renovating bathrooms and kitchens, and installing heaters. In his own words, Cheol-su is a 'construction site multiplayer' who will take on any and every kind of work if it means getting paid.He’s excessively thick-skinned and completely hung up on money, but he lives a resourceful life. He might appear to have no pride at all, but when his meal ticket—that is, any lucrative work he's laid claim to—comes under the smallest threat, he retaliates without mercy. At times, he displays such boldness as to appear foolhardy.He's obstinate, tenacious, and determined. Especially when it comes to money...He runs all around town, diligently applying himself to anything that might bring in money, but if something rubs him the wrong way, he won’t even help to lift a piece of paper off the ground.He gets on swimmingly with his nephews like an older brother or a friend.On occasion, he seems like a clueless older brother who cannot act his age.To the kids, he is a pretty reliable leader (of the pack).His self-proclaimed best feature is his washboard abs: he has a body to die for.When doing construction work on private residences, his physique becomes the ultimate tool of 'salesmanship' with the housewives. When the work isn’t going well, he takes his shirt off in front of his lady employer (so that she can enjoy the view and quiet her anger...).Sometimes he’s very simple-minded, his greatest shortcoming is his tendency to get worked up over nothing at all.

A Korean-American, Anna is the only child of real estate mogul Richard Cho.Her parents died when she was seven, leaving her with a massive inheritance. She was raised by her aged grandmother until the age of twelve. But then, even her grandmother passed away and left her without a soul to rely on.Now, Anna has her husband Billy—but they have no children.Anna grew up like a princess amid the sycophantic adoration of all manner of relatives who lusted after her enormous fortune.She matured in an environment in which everyone welcomed and loved not Anna herself but the trappings of her wealth.Rather than looking to others, she chose the path of infinite self-love and self-aggrandizement.As a result, she became the apotheosis of egotism and narcissism that she is today.She neither heeds nor fears anything under the sky.Those around her call her a witch or, in more violent terms, a crazy bit@h.She does not mince her words: there's nothing she can't or won’t say.In short, she has a poisonous tongue.Because she learned most of her Korean from her grandmother, she speaks with far more condescension and impertinence than age might allow.

Billy is Anna’s husband and the CEO of the massive real estate enterprise that she inherited. He has extraordinary acumen for the real estate M&A business.His main area of expertise is hotels and resorts.Although he was born into an ordinary family, he easily earned his MBA and law degree at Harvard thanks to his astonishing intellect and has since been riding the fast track to success.He is a tremendously gifted entrepreneur, and a boss who enjoys the trust of his subordinates. He’s sensitive and considerate—a pretty great guy once you get to know him.Having enjoyed unimpeded success, Billy can appear cold and calculating. But inside, he’s surprisingly subtle and emotional.Or, to put it more bluntly, he’s rather touchy and small-minded.For a man like Billy, a woman like Anna—who respects nothing, fears nothing, has not one iota of consideration for others, and only demands unquestioning devotion and dedication—is simply too hard to handle; she’s enough to give him a heart attack.

Beguiling men with looks so fragile that she might blow away on a wisp of wind, Yu-gyung is a representative example of the 'damsel in distress' type that women despise.She appears infinitely pure and innocent, but is in fact a tough cookie who knows how to get what she wants.She knows that Cheol-su has been in love with her for a long time, but when he gets saddled with his nephewsfollowing his brother’s death, she turns her back on him as if oblivious to his feelings for her.Still, after her engagement to a man with the perfect credentials gets broken off, she finds herself belatedly being drawn to the simple-hearted Cheol-su and regrets her past indifference.