Conspirasy in the Court 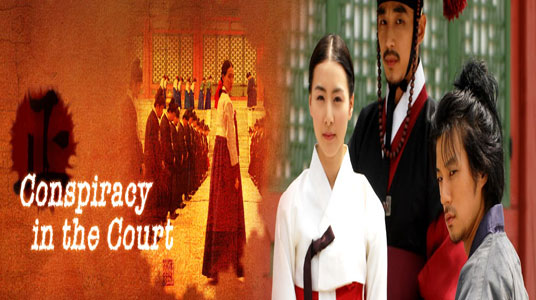 This drama is set in the late Chosun Dynasty, a period when new literature, technology and practical science was introduced from the Ching Dynasty. After the Manchu war and a war with Japan, Chosun was in a declining state, due to it's passive measure to change in and out of the country. The king tries to prosper with a stong reformative policy where he puts people first. The conservative ruling class fears the self-righteous royal authority and their conflict remains unresolved when a mysterious serial killing occurs. While investigating a murder case, three young people share their passion and bitter love. The three main characters of this drama pose the question of what a 'righteous life' is in the era of political and social turmoil of the late Joseon Dynasty, when progressive thinking and the Confucian social reform movement 'Silhak' began penetrating into Joseon from the Qing Dynasty. It was also a period when the 400-year Joseon Dynasty was gradually losing ground, unable to respond to external and internal changes in the wake of the Japanese invasion of the 16th century and the Manchu War, resulting in clashes between the king, who dreamed of restoring his authority through powerful reforms aimed at improving the lives of grass-root people, and conservative political forces, which felt threatened by the self-justified royal authority.

Park Sang-kyu: Born to a nobleman and a servant, Sang-kyu has lived with his heart tightly closed given all the pain and discrimination he has gone through due to his ambiguous social status. The only joy in his dissipated life full of self-torment is Lee Na-young, a woman he falls in love with. He frequents her family's house, where he learns about Silhak, and eventually decides to go to study to China at Na-young's recommendation. But when he returns after four years, he learns that Na-young's family had been banished for conspiracy. He applies to a state exam hoping to take a high-ranking government post and find Na-young, but faces discrimination and ends up in despair and disappointment in Silhak.

Lee Na-young: The only daughter of Lee Cham-pan, Na-young has high goals and strong ambitions. Well familiar with progressive thinking thanks to her father, she teaches her family's servants how to read and believes that society will change someday. She ends up falling in love with Sang-kyu as she tries to open his tightly closed heart. She turns down Yang Man-ho, a man of a high-ranking post and enormous wealth, and encourages Sang-kyu to go to study to China, hoping to become his wife and the mother of his children when he returns. But her life takes a tragic turn when her father becomes accused of conspiracy and her mother later dies after a life in exile. Just when she is unable to endure more pain and suffering, she meets Hwang Jip-sa, who offers her to go to the capital city and teaches her acupuncture and how to use herbs. Na-young transforms into a coldhearted killer to avenge her parents.

Yang Man-oh: Not willing to cringe to the nobility, like his father did, Man-oh leaves Lee Cham-pan's house to rise to a higher post than noblemen. He joins the rebel group Saljugye to oust the nobility and pave the way for people like himself. Soon he becomes the leader of the group but it falls to pieces due to a massive suppression that forces Man-oh to return to Lee Cham-pan's house to ponder his next step. He learns about progressive thinking from Na-young, who welcomes him with a warm heart, unlike his father, and realizes that in order to gain power he needs not a weapon but money

Conspirasy in the Court trailer