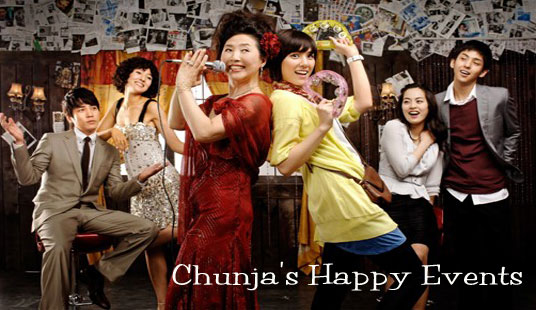 
Being a former bar lady, Hwang Chun-ja lives on a remote island where she runs a karaoke bar. She's also a single mom who raised her daughter Yeon Boon-hong. 24-year-old Boon-hong is a kind girl with a bright personality and she works at the public health center as a nursing assistant. Living with her immature mother whose fading beauty is making it hard for her to attract customers to her bar, Boon-hong maintains a positive outlook on life. One day she finds herself pregnant and abandoned by her boyfriend. She has never found happiness in her life and is na?e about relationships. She never loses hope for a better future even though her life is in the pits.

She is the daughter of Madam Hwang, who runs a karaoke bar named "Night Rose". She has a cheerful personality and likes to laugh a lot. But she also has a sensitive side and cries over small and big problems in her life. At 24, she is an islander who is full of big dreams for the future. She was brought up in a poor, broken family and got poor grades in school, scoring near the bottom of her class in tests. Most of her friends went to college or got jobs on the mainland in big cities but since she was never a high achiever, college was never an option for her. In Tongyeong, she worked as a secretary at an architecture firm and printer's at different times in her career. The architecture firm went bankrupt and the printer's caught on fire, and she found herself jobless twice... Anyway, the incidents she experienced at work made it difficult for her to work as a secretary again. So after a lot of soul-searching, she gave up on finding work and enrolled in a nursing cram school to become a nursing assistant. Now she works at a public health center in her hometown. Since she was born and raised near the ocean, she's a good swimmer and an expert cook of spicy fish stew! Her hobby is to watch fish being auctioned at the fish market at 4 in the morning! She memorized all the names of the fish that are sold at the market and can name any fish that she sees. She is the best cook of fish dishes in her neighborhood! Her mother, who constantly gets into trouble, is immature and when they're together, they bicker a lot but at the same time, she feels sorry for her mother and cares about her more than anyone else in the world. She is brazen-faced at times and has a bold streak, But there are also times when she is fragile and weak like a budding seed in the spring.

Boon-hong's mother. As a former bar lady, she runs a karaoke bar called Night Rose. In her youth, she was a beauty but now she is flabby and her face is wrinkly. She wears heavy makeup and a wig all the time. Her common attire is a sexy long dress. Except for Boon-hong, nobody knows how old she really is. Her life motto is "I'll make my own bad luck" and she really gets into a lot of trouble in her life. She has a silly side but deep down inside she has a big heart and is quite the charming lady. With her many positive personality traits, she is an adorable lady. She believes that people should follow their hearts and when she was young, her heart was broken many times. Yet, she still yearns for love. She has a big, booming voice and will get rowdy when drunk. She is second to none in her silliness but on the other hand, she has a big heart and likes to help other people. She can belt out country tunes with a fantastic voice. She likes to say trendy words such as, "Totally rad," or "It's nice to laugh but don't be the joke," and a lot of other words that surprise her contemporaries. She is also a drama queen. Within 10 minutes, she'll talk at ease with a stranger as if he or she was a long-lost family member. Her friendly attitude is one of her positive assets. She has excellent debating skills and can outdebate most small-town lawyers.

The only son of Park Tae-sam and Yang Boon-hee. He was a straight-A student ever since he went to school and has an upright personality. Everyone in his family has high expectations for him. Unlike most young men, he acts very respectfully and always chooses to do the right thing in life. But he has never dated a girl in his life yet. He is mature beyond his years and has a charming and warm personality. He meets Boon-hong in her hometown when he goes there to search for his uncle who ran away after filing for bankruptcy. He becomes a close friend of Boon-hong and helps her whenever she faces difficult times in her life.

Joo-hyuk's younger sister. As an immature, single woman, she likes to go clubbing and shop at luxury brand stores. After studying in America, she came back to Korea to work as a stylist. She was once a hot chick at nightclubs. Whichever club she went to would become a hot spot because of her. But now she is older and the bouncers make her wait in line. Although she failed three times to get into a Korean college, she was able to study abroad and get a degree at a no-name college in a small American town. She likes to have fun and her personality is similar to her mother in many ways. They both have a cranky personality and act impulsively. She compares her fashion style with Paris Hilton and buys whatever outfit or fashion accessories that Paris is photographed in. She's into the latest trends and luxury brands define her existence in this world. She's a woman who you would expect to never grow up for the rest of her life.