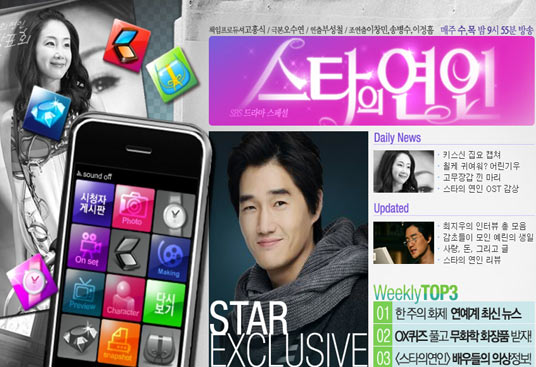 Drama fans' expectations for A Star's Lover were high since it starred top actress Choi Ji-woo (Winter Sonata and Stairway to Heaven) as well as Yoo Ji-tae who rarely appears in TV dramas. The drama, which was filmed in both Korea and Japan, is based on a love story between a star actress and an ordinary man. The love story between Ma-ri, who actually reminded viewers of the real Choi Ji-woo, and Cheol-soo was so poignant it caused many women's hearts to beat faster. A Star's Lover is a must-see drama for anyone who loves a romantic love story.

Lee Ma-ri is a top star in Korea and throughout Asia. Seo Tae-seok, the head of Mari's management firm, hires a ghostwriter to help transform Ma-ri's image. The poverty-stricken lecturer Kim Cheol-soo becomes her ghostwriter in order to earn money for his sister's surgical operation, and whilst they are in Japan he falls in love with Ma-ri. However, when the novel "Lovers in Asuka," written by Cheol-soo on Ma-ri's behalf, becomes a hit, Ma-ri gets caught up in the controversy generated by the ghost writing. The two lovers try to continue their relationship away from media attention, but they end up breaking up. Ma-ri decides to leave the Seo Tae-sook's management firm as he tries to control everything in her life.

Ma-ri is a top star in Korea and throughout Asia. She is a very talented actress who can play many different roles. In fact she is often referred to as the Angelina Jolie of Korea and is followed by hoards of press wherever she goes. In the past her first love suddenly vanished from her life, and as a result she has come to think of love as a game and has broken many hearts. She has a strong professional personality, but can also be genuine, open, and affectionate.

Cheol-soo is a graduate student and lecturer in the Korean Department of Seoul National University. When he was a child his mother left, and since then he and his sister have lived with his aunt. He is very sensitive and cold, and can be quite standoffish to people other than his sister. Since childhood he dreamed of becoming a novelist; but because of opposition from his family, he entered the Korean department in college. He had a crush on Eun-young who was in the same department but he was too shy to reveal his feelings. He becomes a ghostwriter to make money for his sister's medical operation and through this he meets Ma-ri and falls in love.

Woo-jin has the same name as Ma-ri's first love. His good manners help him to win her affection. He excels in his studies, music, sports, and everything he sets his mind to. As the nephew of the CEO of conglomerate M, he is a member of Koreas elite, and he has an MBA degree from Stanford. He now is the head of a media firm. He saw Ma-ri easily reject the proposal of his conceited cousin Ha Young, and he falls for her confidence and beauty.

Eun-young is born into an affluent family. Her father is a professor of Korean literature and a famous critic, while her mother is also an important figure in Korean society. In college, Eun-young attracted a lot of attention from men, but she ends up falling for the withdrawn Cheol-soo. Exhausted from the emotional tug-of-war between her and Cheol-soo, she leaves Korea to study in Japan. Then one day, Cheol-soo suddenly appears in Japan and causes her feelings to resurface. She knows him better than anyone else, and is both concerned and jealous by his developing relationship with Ma-ri.