Cat on the Roof 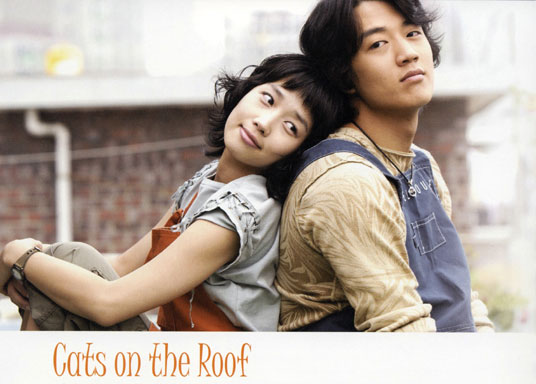 For MBC Photo Gallery from this drama : http://www.imbc.com/broad/tv/drama/cat/cat_photo/index.html

Marriage is thought to be the final conclusion of love: the most precious value in this world. But in reality, the marriage is not so sweet as recklessly imagined. Instead of being a sweet dream, the marriage in reality is a commitment and a promise to live among many kinds of obligation and sacrifice. It is rather the end of love than a sweet beginning. This is not what the lovers are aiming about. It's not marriage but living love they are shooting for. This is a drama of couple who has found a new way of living happily in Love.

He is a prince who is charming and a playboy. Pleasure' is what his life is aiming at. His selfishness puts himself in the center of the world and he feels no obligation to think of other people's welfare. He knows how to talk himself out of trouble and he never feels sorry. He does not seem to be in need for anything but in fact he is a lonely boy. He has been raised by his grand parents since his parents died from an accident. He always has this strong urge to have a family on his own and this becomes the point for girls to turn him down. His life is caged after a mistaken one-night-stand but he is given a new chance for a better life as he passes an exam to be the lawyer.

Her motto is 'Just Do It'. She thinks she can do anything if she puts her effort and passionate to it. She thinks herself smart but she's not quick enough to read other people's mind and tends to make mistakes every time. But she has a pride I herself and she is not ashamed of her mistakes. 'Living with Kyung-Min' was her thoughtful decision and she is not ashamed of it either. After a mistaken one-night-stand, she decides to take care of Kyung-Min who is almost homeless. She wanted to take care of him and make a sincere man but she had never imagined that he would be a laywer.

She is a beautiful Venus smiling with a long silky hair. Her family are all working in law departments... considered to be a family of dignity. She is a polite and beautiful which is the ideal image for all man kind. Instead of turning men down, she tells them that she wants to remain as a good friend and this makes them more urge for her. She is just too pretty to be a friend. She has Kyung-Min in her heart but he does not seem to respond enough. Kyung-Min, although being a playboy, is somewhat afraid of her background. She seems to be standing on a higher step than other ordinary girls he has been flirting with. She thinks Kyung-Min is caught up with Jung-Min because of unwanted one-night-stand and she wants to free him from this awful girl, Jung-Eun.

The vice president of an advertising company. He is rational and has ability. He can calculate every aspect of life to money. If Kyung-Min is like a naive boy, Dong-Joon is manly. He has been the winner all his life and he's sure he will always be the winner for all his life. Consequently, he is the prince charming of many girls but he thinks only the fools marry. He likes having a pleasant time with women but never imagines himself for a marriage. But he starts to be messed up since he meets Jung-Eun. He can not believe himself that he wants to marry her!

Cat on the Roof Trailer