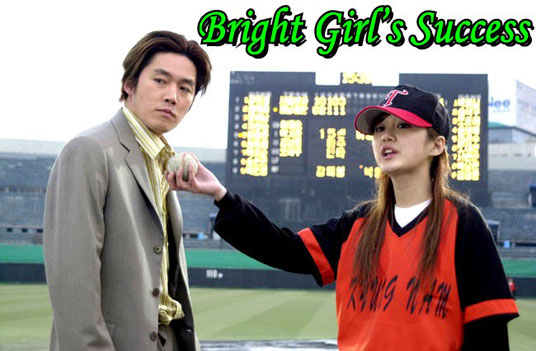 For SBS Photo Gallery from this drama : cliick here

In a year dominated by long dramas like Yain Shidae and Mermaid Girl, it was refreshing to see this little romantic comedy make its way to the top spots, and make its star one of the biggest attractions in Korean entertainment. Before this series, Jang Nara was a moderately popular singer in search of her first big hit. Fast forward almost a year, and here we are, with the country in full Jang Nara syndrome, with her records hitting record sales, and film offers piling up (she got a record 300 million won for her role in 'Oh! Happy Day' which is hitting theaters soon). Also, her father (stage actor Jang Myun-gyo a.k.a. Ju Oh-sung) has benefited tremendously from his daughter's success, recently being cast in 'Les Miserables.'

Yang-soon (Jang Nara) is a simple girl living in the countryside with her grandmother. She dreams of saving a prince from harm with her martial arts, and living happily with him ever after. Han Gi-tae (Jang Hyuk) is the president of a successful makeup company. He's the classic silver spoon case: spoiled, arrogant, taking everything for granted. His world changes when he accidentally falls in Yang-soon's bathtub (I'm not kidding you). It won't be her first meeting with Gi-tae, because she's forced to move to Seoul to work as a maid. Guess who will be her new boss?

Yang-soon's first contact with city life doesn't begin well. She's bullied at school, and doesn't connect with Na-hee (Han Eun-jung), Gi-tae's girlfriend. Thankfully, she also makes new friends. Seok-gu (Yoon Tae-young) seems attracted to her, and his sister Bo-bae (Chu Ja-hyun) actually becomes her best friend. But, even more surprising, Gi-tae seems to slowly warm up to her. When his career completely changes thanks to rival Joon-tae (Ryu Soo-young) and his father's behind the scenes intrigues, his outlook on life and Yang-soon's personality evolves. She's now the one who's actively trying to help him start his life from scratch, and make a better future for himself.

Yes, it all sounds terribly predictable, but don't worry. Bright Girl smartly takes its paper-thin plot and develops it around the characters, instead of shameless manipulation and/or ultra-convoluted plot developments. This might just be the funniest drama I've seen all year, because it never takes itself seriously. This positively affects the more dramatic portions of the series, so that they become actually touching. Also, while the characters are broad caricatures and follow the dichotomy of the genre, they're treated with such a lighthearted approach that it's hard to not be charmed by Jang Nara and company.

Displaying a quite impressive Chungcheong-do accent (at least from a non-native speaker's p.o.v.), she makes Yang-soon emerge from the walking cliche she seems at the beginning. Her stubborn insistence on only calling Gi-tae 'ajusshi' instead of 'oppa,' up till the end. Her devotion to her parents (no matter how often they get in trouble), and her manners perfectly convey her country girl upbringing, never mocking it (think of it as an affectionate tribute). Jang Nara might not be a great actress, but she has an addictive personality, a tremendous energy and screen presence which is evident from the first episode. Her chemistry with Jang Hyuk couldn't be better. He overacts a little too much, but most of the time that turns into laughter, too.

Bright Girl also benefits from good supporting performances. Kwon Hae-yo is always a pleasure to watch, no matter how small his roles are. He might just be the most underrated character actor working in Korea today. Yoon Tae-young and Chu Ja-hyun also make their characters likable and a little more realistic than the paper thin plot seemed to allow. Yang-soon's parents are a riot, and while Han Eun-jung shows little else other than her beauty, Ryu Soo-young is surprisingly effective as Joon-tae. His latest movie appearance in Summertime consisted of pretending to masturbate and having sex with Kim Ji-hyun, so that probably made his job in this series much easier to digest.

Despite the obvious flaws (this is not exactly an unconventional and terribly creative series), Bright Girl is really fun to watch. The characters are well developed and the performances very good. The manipulation never bothers, and it has a quick pace which will help even the most skeptic casual fan. In short, one of the funniest, most charming miniseries of the year. (Review by V. "X" Naldi)