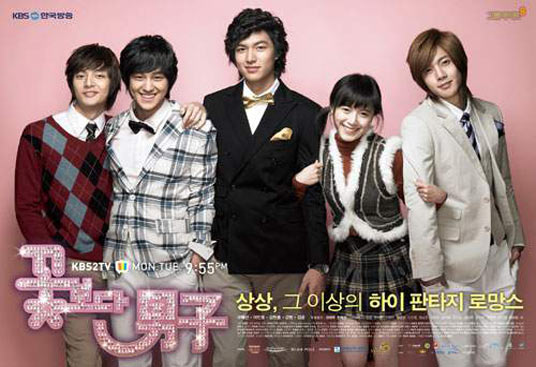 The 'Iconic Love Story' for those who wish to stay young at heart forever!

"Boys over Flowers" is the highly anticipated remake of the famous Japanese comic book series. Jan-di, the Heroine, is the poor but bright girl who has a strong sense of justice and full of vitality. She transfers to an exclusive high school where only the rich go. In there, she encounters with the four rich and quirky boys and experiences love and friendship. The storyline illustrates the supreme fantasy that a drama can bring out the most. Each of us probably has an experience of admiring or dreaming of something. The drama 'Boys over Flowers' is the concentration of the admirations.

Jan Di is an average girl whose family owns a dry cleaning store located near the luxurious and well known Shin Hwa College. Jan Di meets the four richest and most spoiled boys, F4, when she delivers laundry to the school one day. After saving a boy from committing suicide, she is admitted into the school. An incident involving Jan Di's friend, Min Ji, forces her to declare war on the leader of the F4, Goo Joon Pyo.

The Korean drama is based on the Japanese manga series of the same name, which produced 36 volumes over a period of 11 years. It has already been produced as a drama series in Japan and Taiwan, where it was hugely popular. Although there was some concern as to how it would compare to previous versions, the Korean version has been eagerly anticipated. The drama surpassed expectations, featuring magnificent locations such as New Caledonia and Macao, as well as some of Korea's most beautiful destinations. The appearances of Korea's good-looking cast have been praised for staying the most faithful to the original series, and their impressive acting skills are said to give the drama great depth. has been an enormous hit since its first day. The drama has daily been the center of media attention, and parodies have even been made of the drama

Geum Jan-di is a normal schoolgirl who accidentally prevents a student from committing suicide while delivering laundry to Shinhwa High School. As a result of the incident and then due to her exceptional swimming skills, Jan-di is specially selected to join Shinhwa High School, which normally only accepts the top 1% of the richest people in Korea. The school is dominated by "F4" the four best looking, most powerful boys in the school, and when she starts Jan-di finds their red card hanging in her locker, which makes her F4's and the rest of the students' target for bullying. However, Jan-di overcomes this with her uniquely optimistic personality, and Gu Jun-pyo, the leader of F4 and also the heir to the Shinhwa business conglomerate, falls in love with her. Used to always doing as he pleases, Gu Jun-pyo begins a relationship with the pure-hearted Jan-di, but there are plenty of obstacles and misunderstandings that get in the way of their happiness.

Geum Jan-di is a normal schoolgirl whose family manages a small dry cleaning business. One day she is selected to join the prestigious Shinhwa High School, where she joins the swim team. Unable to stand the nagging of her parents, Jan-di decides to attend Shinhwa High School, but when she starts she is tagged with the F4's red card and has to endure teasing and bullying from them and the other students. However, displaying her strong, bright personality, Jan-di stands up to F4 and the entire student group. At first she begins to fall for F4's Yun Ji-hu, but then the leader of F4 and heir to the Shinhwa business conglomerate, Gu Jun-pyo, openly professes his love for her in front of the school, and she becomes the envy of all the girls. Geum Jan-di is an optimistic and honorable girl who is never dazzled by financial wealth or social status. Even after she joins Shinwa High School she remains true to her ideals.

Gu Jun-pyo is the leader of F4 and heir to the global business enterprise of Shinhwa Group. His trademark is his curly hair. He is used to doing whatever he wants whenever he wants and often offends others with his aggressively direct personality. However, under his tough exterior Jun-pyo is a pure-hearted young boy. Gu Jun-pyo was raised by the employees of his parents' company, since his parents didn't have time for him, so, naturally, he is attracted by the warmth of Jan-di's normal family. Although he dismisses Jan-di at first because she is not rich, he ends up falling head over heels for her charming bright personality.

Yun Ji-hu is the most handsome member of F4 and the grandson of a former Korean president. When he was five years old, he was the sole survivor of a car accident that killed both his parents, and as a result he became withdrawn and anti-social. However when he meets his first love, Seo-hyeon, she helps him get over his difficulties. After meeting Jan-di on the staircase, Yun Ji-hu also becomes her knight in shining armor and helps her out whenever she needs it. This character likes to be alone and has a bit of a strange personality. Yun Ji-hu has a great love and talent for music, and is set to become the leader of the Suam Cultural Foundation, Suam Art Center, and Suam Orchestra.

Lee Jeong's father is Korea's most famous Master of Arts. When Lee Jeong's older brother leaves the family, Lee Jeong suddenly becomes the heir to Korea's largest private museum, Woo Song. He is popular with girls due to his gentle manners and clean-shaven appearance. After being hurt by his first love he turns into a bit of a playboy, but then he starts to show an interest for Jan-di's friend Ga-eul. Cold and uncompromising at first, Lee Jeong is in fact a warm character at heart.

For many generations, Song Wu-bin's family has been the leaders of the criminal organization, Ilsim, and he is the heir to Ilsim Construction. Ilsim has extensive networks and a great ability in manipulating cash flows, which even the Shinhwa Group cannot ignore. Whenever his fellow F4 members are in trouble, Song Wu-bin makes a call to his large network of connections so that the problem is quickly taken care of. Song Wu-bin has an innate sense of finances and is also a great fighter. Even though he is still young, Song Wu-bin already displays a charisma well fitting for a boss of the underworld.