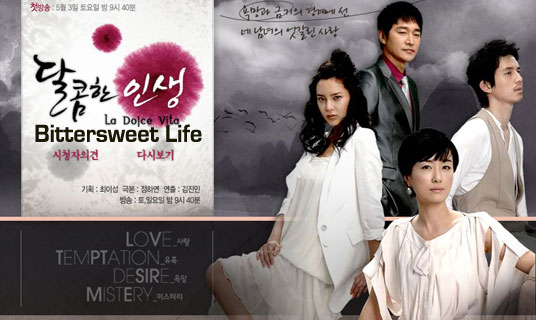 A love that is unfamiliar but sad. Love is an empty space that can never be filled in.

A changing world with changing people...

In this rapidly changing world, people are caught off guard by new events and have a hard time adapting to the times. Some types of taboo behavior are now acceptable and people even flaunt it. The confusion in social values has become an individual problem that people must grapple with by themselves. One middle-aged couple faces a crisis as the foundation of their family crumbles. When they reveal their true desires to each other, it takes on the form of a question to viewers on how important it is to reconnect with the values that are in disarray around us.

A melodramatic story and mystery...

A high-priced luxury apartment in the downtown area of Seoul. In this peaceful neighborhood, one young man committed suicide under uncertain circumstances. Park Byeong-shik, a retired detective, discovers that the dead man is Lee Joon-soo, a fugitive he had been pursuing for years before he left the force. He picks up clues to solve the uncertain cause of his death.

The story begins with events that had happened six months before the man died. Did Lee Joon-soo really kill himself? He had a lover named Hong Da-ae. And somehow he was also linked to middle aged housewife named Yoon Hye-jin. But what exactly was their relationship? The drama traces events in the past and present to reveal the intricate web of story arcs.

The first episode was shot on location in Sapporo for three weeks to capture scenes of beautiful snow-capped mountains. The production quality of the show is very high as each scene was meticulously shot with great attention to small details and angle shots. The drama contains the fun elements of a miniseries as well as highly charged moments. It will bring a fresh breath of air to viewers who are weary of the tried and true formula that they see over and over again.

Yoon Hye Jin and Ha Dong Won are a couple whose marriage is on the rocks. Both have secret love affairs with other people. Lee Joon Soo is a man that accidentally meets Hye Jin and falls for her.

Forgoing a career as an interpreter, she chose to become a full-time homemaker when she married Dong-won. Although she gave up her career dreams, she made the decision based on what she thought was best for her children and husband. She believes that her choice equates to happiness. So her husband is always the decision maker at home. And so the life of one woman came to a standstill career-wise. But when she begins to become suspicious of her husband, her life moves into a different direction.

A fund manager who oversees a mid-cap fund and is rated as one of the top ten fund managers in Asia. He’s a handsome man and is also said to be one of the best-dressed people at work. He has a lovely wife and two children. With a picture-perfect family, he has a narcissist bent. But it as so different with Hong Da-ae. If he could, he would have given her everything he had to win her heart but it was not easy. Even though he was carrying on a long-term affair with her, she never wanted to become his wife or mistress. And Dong-won believed that was why they were able to have such a long relationship. That is until Da-ae told him she wanted to stop seeing him.

In the beginning, he was introduced in business circles as a friend of Sung-gu. But when Sung-gu withdrew from the social circles, Joon-soo inherited the fame that Sung-gu once had. People knew him as Joon-soo from then on. But Joon-soo and Sung-gu were very tight friends. Sung-gu had everything that Joon-soo could never possible have. But things were changing as Joon-soo started dating Da-ae. Sung-gu wanted to check out Joon-soo's girlfriend. In fact, he wanted to steal her from him. Joon-soo knew what was going on. But Da-ae resisted the idea.

Scarlett, a jewelry shop in Apkujung, is famous for two reasons. One reason was that top celebrities frequented the jewelry store and the other, Da-ae the owner of the jewelry store was strikingly beautiful. Da-ae has pretty looks that fit in with the times. But when she began seeing Dong-won in an indecent arrangement, her dreams were dashed away and replaced with a different desire. Then one day, Joon-soo entered her life. When she met Joon-soo, Da-ae found the man that made her realize that she could no longer continue her relationship with Dong-woon.