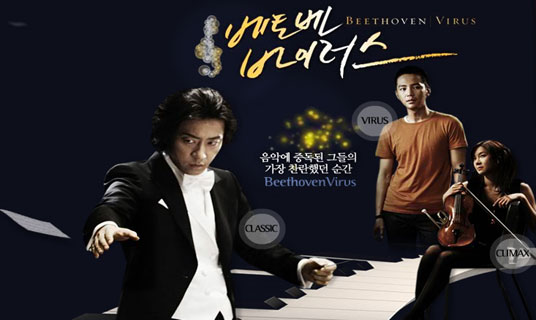 Kang Gun Woo is an orchestra conductor in his 40's. He is an elite workaholic conductor who has a very bad reputation. He is known as someone who will do absolutely anything in order to create the very best music. However, due to his self-righteous and stubborn personality he thinks that only his thoughts are correct which makes him unable to form good relationships with those around him. He meets Du Ru Mi, a violinist, and a trumpet player who has the same name as him, and together they form a love triangle.

Two musicians who retired from their musical careers for different reasons join together with a demanding and difficult genius conductor to form an orchestra against all odds.

Although it requires a lot of hard work to form their orchestra, they keep chasing their dreams of doing what they love the most in the world and this gives them great satisfaction.

Three young and old people with different personalities and life experiences gather together under a common dream and they find love and the room to forgive each other as they eventually earn each other's respect. The drama exudes a positive energy.

Age: 42. Male. Maestro. Nickname is Ma-ae. He is an elitist and never settles for second best. With an oversized ego, he has a righteous attitude and thinks he's superior to everybody else. He does not like to socialize with people. He believes that you need talented players in order to give marvelous performances. Thus, he abhors players with mediocre talent and treats them with disdain. This is how he earned the nickname, "Orchestra Killer" and went on to become a legendary musical figure in Korea.

Age: 27. First violinist. Orchestra conductor She is true to her inner desires and has a positive outlook on life. She never holds a grudge. With her pale white skin and long straight hair, she plays the violin while wearing a black silk dress with her eyes half-closed. The sight of her playing the violin is picturesque. However, she acts like a tomboy.

Age: 24. A genius conductor. Trumpet player He shares the same name as conductor Kang Ma-ae. He's straightforward, frank, cool and open. He's a man of character. With a sharp logical mind, he will not tolerate illogical behavior. Underneath his strong character, he harbors an exquisite musical talent.