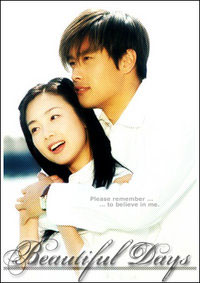 For SBS Photo Gallery from this drama : http://www.sbs.co.kr/tv/beautidays/

Beautiful Days (Ah Reum Dah Woon Nal Deul) uses some of Korea’s well known actors to deliver a story of two orphan girls, two step-brothers and their entangled tale of greed, secrets and disloyalty. The story gives the main characters a chance to gain wisdom through life experiences. Both the story and the actors execute a great melodrama.

The story is dynamic and realistically written. Showing the source of each main character’s notable traits from painful experiences, the story starts in 1975, then forwards to 1985 and 1995, and finally picks up 5 years later in 2000 where most of the story takes place. Within the first two decades shown, the audience learns why Min-chul is unloving to most people, why his younger sister, Minji, is rebellious, and why Sun-jae is so obedient to their father. In 1995, the audience learns why there is heartache between Sina and Yonsoo. Even while the story falls short to offer definite conclusions to sub plots, it does offer closure by establishing the main characters’ evolution or growth. Just as the audience is shown the source of the characters’ troubles and pains, the drama continues to unravel situations that force the characters to change. The realism and complexity of the characters starts with the story; however, the cast does an excellent job of bringing them to the screen.

The cast works great together. First, Lee Byung Hun shows Min-chul as the resentful, cold-shouldered son to his father, brother and step-mother. While to Minji he shows Min-chul as the caring, trusting brother. Both are attractive personalities that together make up a complex character. When he and Choi Ji Woo are in a scene together, Lee Byung Hun is strikingly bold and demanding, sometimes not saying much at all. In fact, some of the drama’s best scenes are ones in which Lee Byung Hun doesn’t have many lines in but requires just as much performance. For example, when he and Choi Ji Woo are in the movie theater, not a single word is said, but the heartache and pain Min-chul feels is shown in his expressions. As for Choi Ji Woo, she begins portraying Yonsoo as a strong woman that is cautious of Min-chul. Her stuggle to trust herself plays out well. Next, Ryu Shi Won is noble as the intimidated brother and offers a certain amount of gentleness to the Lee family. Finally, Lee Jung Hyun and Shin Min Ah both represent the younger disobedient sister well, making the outrageous squabbling scenes convincing.

The story and cast of Beautiful Days illustrate characters’ trials and growth skillfully. The complex beginning establishes a great source for the drama’s development while the well rounded characters are carefully crafted and displayed. The two elements, story and cast, brings one of the better performed Korean dramas to audiences.

As for the music of Beautiful Days with Korean Pop Star, Lee Jung Hyun, as part of the cast as well as a story that revolves around music industry characters, the drama has amazing power ballads and lovely musical scores. Both Lee Jung Hyun and Ryu Shi Won have tracks on the OST and when hearing their renditions the memories of the pain and happiness the characters endured in the drama are easily relived. The actual Korean musician Zero is also featured on the OST, bringing a soothing voice to climatic ballads, like Yak Sok (track 2), that makes the heart soar.

Seong-choon disguises the death as an accident. Overcome by grief and sorrow over her husband’s sudden death, Myeong-ja gives a birth to a son. Seong-choon who has raised Min-cheol and Min-ji alone after the death of his wife, proposes to Myeong-ja. She accepts and moves into his home.

Yeon-soo and Se-nah, who have grown up together in the same orphanage, are preparing to throw themselves a birthday party in a warehouse. At this time, Seong-choon, President of Victory Recording, and his son, Seon-jae, visit the orphanage - a fateful meeting for Seon-jae, Yeon-soo and Se-nah.

Many years have passed and Seon-jae is now a medical student, Min-cheol is team manager for Victory Recording, and Yeon-soo and Se-nah are living in Seoul.

Seon-jae falls in love with the older Yeon-soo, Se-nah has a crush on Seon-jae and dreams of becoming a singer, Zero, the singer without a face, appears in front of Min-cheol, Seon-jae’s step-brother, at an MP3 song contest. Netizens are raving over Zero’s song and all the recording companies are eagerly looking for the singer Zero.

On the other hand, Seon-jae, who has lived an anxious existence all these years, slowly comes to realize the secrets behind his birth and his father’s death.