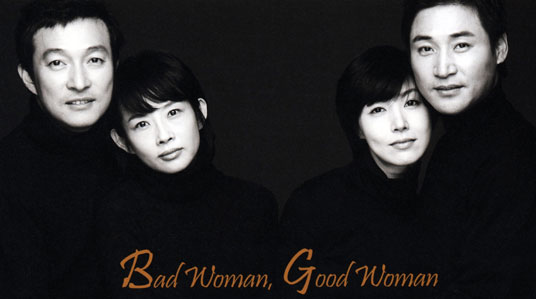 For MBC Wallpaper from this drama : http://imbc.com/broad/tv/drama/badwoman/wallpaper/

Let me build a picturesque house on that green field "Let me build a picturesque house on that green field - And live there with my beloved for a hundred years." These lyrics to an old pop song still represent the hopes of countless people.To watch your child at play in a home as beautiful as a painting, with your beloved by your side... We all dream of such everyday bliss, but it is by no means an easy dream to realize. Each of us has a house in our hearts known only to ourselves. In the heart of every person, there is a house that only he or she can enter. It can never be shown to anyone else, no matter how close they might be. It's a house that we have built as a place of memory - pain- or even a deep dark secret... But sometimes such a house exists not just in one's heart - there are those who wish to have a place like this somewhere in the real world, where nobody else can know. Husband and wife, so close yet so far away. They say that a tenacious bond in a former life carries over into one's present life as the bond between husband and wife.On the one hand, it is the closest possible bond between two people, both physically and spiritually; on the other, it is even more distant than the gulf that separates strangers.The person we have been living with under the name of 'wife' or 'husband' may be someone entirely different from the one we think we know.If, one day, you discovered that your wife or husband had another life you had never even suspected, what would you do...? The protagonists walk a perilous and precarious tightrope.'Would I have been happy if I had married my first love whom I truly loved? What does love or family mean to them?

The wife of Song Geon-wu.Se-yeong is a stay-at-home wife of six years.She lost her parents and younger brother in an accident when she was just a child and grew up as a lonely orphan. But thanks to her mother’s close friend, Gyeong-seon, she was able to make it through high school. When she met Geon-wu, he already had a daughter named Jin-a, but she married him nonetheless. That was six years ago. She had admired Geon-wu for some time, and her heart went out to motherless Jin-a, who made her feel as if she were seeing her own self. She chose to marry Geon-wu with no hesitation whatsoever. Se-yeong even takes care of her Alzheimer’s-inflicted grandmother-in-law, but she has never once shown a sour face.She is cheerful and vivacious to the point of goofiness, to the constant delight of her family.To outside eyes, Se-yeong seems too good to be true. But Se-yeong herself always feels immense gratitude to her in-laws for being her family.

Se-yeong's husband. A talented pediatrician and the chief of his own hospital, Geon-wu has achieved enviable social success. He has never once disappointed his mother's hopes, and has been a dutiful son often willing to give up what he wants for his mother's sake. But he could not bring himself to give up Seo-gyeong, no matter how much his mother wanted him to.Unable to overcome his mother's relentless objections, Geon-wu said goodbye to his beloved Seo-gyeong and shut out the hope of love from his life. He met and married the woman his mother approved of:Se-yeong, with her maternal love for Jin-a. He believed that this was a woman he could safely entrust his family to.But two months after he was married, he met Seo-gyeong again and came to realize that he was incapable of getting over his love for her.

The wife of Kim Tae-hyeon.Seo-gyeong possesses elegance, beauty, culture, and sophistication, as well as a kind and considerate nature. She even boasts an irreproachable family background, wealthy in-laws, a loving husband who only has eyes for her, and an adorable son...! Several years ago, Seo-gyeong and Geon-wu encountered severe objections from both their families without even knowing why they couldn't be together. They even took the extreme measure of getting pregnant, but it was not enough. Seo-gyeong wanted Geon-wu to run away with her but he refused, saying that he could not go against the wishes of his mother, a lonely woman who raised him on her own. In the end she had to part from both Geon-wu and their daughter, and go abroad to study. She never forgot Geon-wu for a single moment, but upon hearing that he had gotten married, she lost all her hopes and married Tae-hyeon, the man her father wanted for her. She eventually received her degree and returned to Korea. And Seo-gyeong and Geon-wu, each as the spouse of another, come to reunite.

Seo-gyeong's husband.Tae-hyeon is a kind and devoted father and husband who is second to none in loving his family. He often ponders how miserable he might have been if he hadn't met Seo-gyeong; he loves her so much that the mere sight of her still makes his heart beat faster. What's more, their beloved son Wu-ram is the apple of his eye. His life is perfect: he has a wife and son he loves more than life itself and a wonderful family to boot. There's nothing more he could possibly wish for. But Seo-gyeong is always busy at the hospital. From time to time Tae-hyeon wonders if Seo-gyeong really loves him but...He tries to brush aside such worries, discounting them as the unfounded misgivings of a man with a smart and beautiful wife.