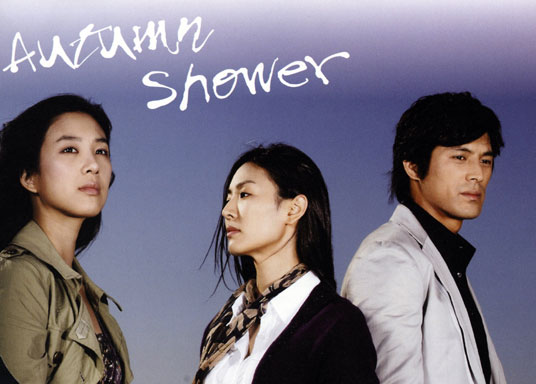 For MBC Wallpaper from this drama : http://www.imbc.com/broad/tv/drama/shower/wallpaper/index.html

For MBC Photo Gallery from this drama : http://www.imbc.com/broad/tv/drama/shower/photogallery/index.html

The Two Close Friends; Gyu-eun and Yeon-seo-Though their personalities and tastes are quite different- they have built a very special bond over the years.One day both women run into a man named Yoon-jae on two separate occasions. Both of them have a crush on him. Without realizing she loves the same man that her best friend loves- both of them are just happy to find someone special. When Gyu-eun introduces to Yeon-seo Yoon-jae as her boyfriend- Yeon-seo is shocked. When asked about the man that she has been talking about- Yeon-seo names Soo-hyeong, who is just a friend.Soo-hyeong is Gyu-eun and Yeon-seo's friend. Left without any other choices. Yeon-seo gives up Yoon-jae for Gyu-eun. Even though Yeon-seo tries to avoid Yoon-jae, the four people often hang out together.Despite their families' disapproval, Gyu-eun and Yoon-jae's love get deeper and deeper. However Yeon-seo can't put Yoon-jae out of her mind. Hiding her feelings about her friend's fiance- she helps her friend prepare for the wedding. Yoon-jae and Gyu-eun are Married.Yeon-seo believes that she can forget the man who became her best friend's husband. However, Gyu-eun has an accident and falls into coma. Yoon-jae doesn't give up Gyu-eun. Yoon-jae's parents who initially weren't thrilled about his marrying Gyu-eun persuade him to leave Gyu-eun. However, believing that she'll wake up soon- Yoon-jae legalizes their marriage. Yeon-seo is touched by his love.Since he can't be by his wife's bedside all the time- he sometimes asks Yeon-seo to take care of Gyu-eun whenever he goes out of town on business or works late. There isn't any agreement between the two, but they take turns taking care of Gyu-eun now. Yeon-seo realizes that she still has special feelings for Yoon-jae. She tries to avoid him. Without knowing about Yeon-seo's feelings Yoon-jae believes that she blames him for her best friend's accident. Since Yeon-seo isn' t sure if she can resist any longer, she volunteers to be transferred abroad and leaves the country.

He's raised by a music professor father and a very sophisticated mother. He hasn't known any difficulties while growing up. He's very well-read- nice, and active. He has a good sense of humor. He has a very sound philosophy about life. He's very sincere. He's a decent man who doesn't come around very often. He's very popular with women, but he hasn't known many. Unlike his almost perfect appearance he's very shy around women. He started a construction company with some friends. He also participates in a project in which he builds houses for the poor. He runs his company through hard work and honesty. He's a respected CEO. A charming and socially respected man gets confused when he realizes that he's falling for his wife's best friend. He's thrown into total confusion. He loves them both. He's become a target of criticism and sympathy.

She was a smart child. She was the top student at school. Despite her difficult family situation, she went to college on a scholarship and graduated first in the class. She's competitive and challenging. She's decisive and bold. She's reserved and she doesn't talk much. She doesn't express her feelings often. She quietly does her own thing. She doesn't have many friends, but she has a few close ones. However, she's ready to do anything for her friends, but in return, she expects others to do the same. She lost her father when she was very young. Her mother died when she was a high school student. Since then, she's relied on Yeon-seo like her own sister. She seems strong, but she hides her feelings of loss, loneliness and insecurity. Her hobby is shooting. She becomes good enough to compete in the Olympics. She's the youngest PhD and professor in Korea. She's a member of the research team developing medicines for serious diseases. Her dream is to become a Nobel Prize winner. However, she marries her first love Yoon-jae and has an accident on their honeymoon, which makes her fall into a coma.

Her parents are divorced and her father was abusive. Her friendship with Gyu-eun was the only way of escaping from her terrible reality. Growing up, she had twisted images of fathers and men. She envies Gyu-eun's talents and she loves her as her own sister. She's cheerful and active, but she doesn's have a goal in life. She always seems to have plans and dreams, but she has just as many excuses not to carry out her plans. She's afraid of many things and she's indecisive. It seems that she says out loud everything coming to her mind, but she's hesitant to talk about her passions and what she really wants in life. However, she's very clear about what she likes or not. She has a hard time doing things by herself, but sometime thanks to Gyu-eun, she does something she otherwise wouldn's have done. Thanks to Gyu-eun's advice, she realizes that she's very talented in interior designing. When she learns that the man she loves is in love with Gyu-eun, she gives him up for Gyu-eun. However, while taking care of Gyu-eun, she's impressed and touched by Yoon-jae's devotion. She falls in love with Yoon-jae. She's confused between friendship and love.

He's a mutual friend of Gyu-eun and Yoen-seo. He's good-natured and a very good listener. Gyu-eun and Yeon-seo feel comfortable telling to him whatever they have in mind. He's a neurosurgeon who is charge of Gyu-eun. He's been secretly in love with Yeon-seo.