Autumn in my Heart (Endless Love) 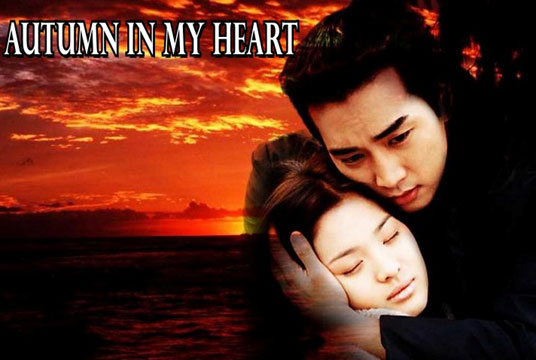 
In the fall of 2000, audiences across Korea were glued to their television sets as Gaeul Dongwha (Autumn in My Heart) began to win the hearts of all. This television drama was the first part, in a four part series based on each season, by producer Yun Seok-ho. The talented young actors and actresses, along with beautiful filming locations, made this tragic love story a piece of television artistry that captured the hearts of all. Even after the series ended, many fans still visit the filming locations. Some of these include the beautiful sands of HwajinpoBeach, nostalgic Abai Village, and a small closed elementary school set in the countryside.

The story begins with toddler, Yoon Joon-Seo accidentally causing the switch of his sister and another baby when he drops the name cards on the two babies cribs in the hospital baby room. A nurse who came in put them back incorrectly. The story then continues with the teenage years of the two main characters: Yoon Joon-Seo (Choi Woo Hyuk) and Yoon Eun-Seo (Moon Geun Young). They are the children of a rich professor and believe they are biologically brother and sister until Eun-Seo gets hit by a truck and needs a blood transfusion. At the beginning, Eun-Seo is very popular in school whereas her rival Choi Shin-Ae (Lee Ae Jung), is smart but does not get the attention she craves from the teacher and their classmates. Later, their situations are reversed when the switch is discovered.

After blood tests were carried out by the doctor on Mr. and Mrs. Yoon for Eun-Seo's transfusion, the Yoons find out that Eun-Seo belongs to Mrs. Choi, and Shin-Ae is the Yoon's biological daughter. At first, only the parents and brother knew about this, but eventually, Shin-Ae discovered the truth after she got into a fierce argument with her non-biological mother over a teddy bear she received from her biological father. Eun-Seo only discovered the truth after Shin-Ae wants her biological parents to take her in. In the end, the two daughters were returned to their rightful parents. Shin-Ae moves in with the Yoon family, and Eun-Seo goes to live with Mrs. Choi (her biological father is dead) who operates a small restaurant living in abject poverty.

Years went by, and in the duration, the Yoon family went to the United States, where Joon-Seo (Song Seung Heon) returns to South Korea as a successful artist. He went back to the town he lived in, where he encountered his old friend, Han Tae-Seok (Won Bin), who stays at the hotel where Eun-Seo (Song Hye Kyo) works as a telephone receptionist. Tae-Seok (who doesn't know about the entire brother and sister mixup that happened earlier) fell in love with Eun-Seo and played games with her until she was fired from her job. One day Eun-Seo saw Joon-Seo and followed him to the beach where he was with Yoo-Mi (his fiancée) and Tae-Seok and the two "siblings" finally meet after ten years.

Eun-Seo and Joon-Seo pretend to have a sibling relationship in front of the others, but they meet each other secretly and become deeply in love, though she always refers to him as "brother." Shin-Ae (Han Chae Young) finds out about their relationship and exposes the two after she found a love letter Eun-Seo had written to Joon-Seo. The two decide to stay together, but are soon forced apart again because their parents are against the union, and Yoo-Mi hurts herself and threatens suicide to hang onto Joon-Seo.

As a fight between Joon-Seo and Tae-Seok grows over their professed love for Eun-Seo, she discovers she has leukemia (the same illness that took her biological father's life). She didn't tell anyone except Tae-Seok, who offers to pay for her treatment. When she takes a turn for the worse, the others start finding out. When it was clear that there was no hope, Joon-Seo finds out and takes her home so she can spend her last days with him. At this point, Yoo-Mi finally leaves him. Eun-Seo dies as Joon-Seo was carrying her around the beach where they spent her birthday as teenagers.

Before Eun-Seo died, she told Joon-Seo not to follow her in death, and to continue living. However, Joon-Seo, dazed and grief-stricken by the death of his lover and "sister", is struck by a truck in the same place as Eun-Seo's accident and presumably dies.

Autumn in my Heart trailer