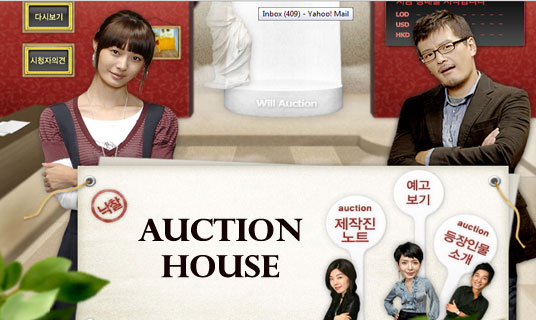 For MBC Photo Gallery from this drama : click here
Brief Synopsis
At an auction, everything has monetary value! How much is your life worth in dollars? Do you want to be appraised? Sotheby's of New York, Christie's of London, and Hi Auction of Seoul! This is another battleground. Art, history and your life can be evaluated in terms of dollars. This drama delves into the greed of humans that underlie art dealings.

The thrilling action at auction houses, A story about auctioneers who professionally compete against each other! Hi Auction, Korea's best auction house, is a place of high drama and action that is over the top. At an auction, there are tensions between the seller and buyer. People try to figure out who is bluffing or who is making a serious offer. Auctioneers try to outsmart and outmaneuver buyers and competitors. Art collectors and art dealers engage in close partnerships or betray each other if the need arises.

This is harder than "Mission Impossible!" Cha Yeon-soo is a new recruit at Hi Auction, Korea's best auction house. Since her dad is an art forger, she is almost forced to quit the company but she tries to hang on to her job by performing impossible tasks that are delegated to her. This is a story about her survival! A success story about one young woman who takes on the auction world.

She is an honest person with a sunny personality. She is sweet like a strawberry and tough like a weed. Underlying her brashness and sure demeanor, she is a tough competitor. After getting rejected 50 times in her job search, she watched a TV program about auctioneers by coincidence and decided to apply for a job at Hi Auction on a whim. She is overjoyed to finally land a job. After getting to know Min Seo-rin, the top auctioneer, she admires her and dreams of becoming just like her. She works hard to become a better auctioneer than Min Seo-rin. But her dreams are almost crushed by Min Seo-rin, the very person she admires. Min Seo-rin tells her to quit the company because Yeon-soo's dad painted forgeries. But Yeon-soo does not back down and holds on to her job as Min Seo-rin makes her life tough. It's the survival of the fittest. But then life throws a curve ball at her! Her boss, Oh Yoon-jae, is only interested in assessing the fine artistic details of art pieces without any regard for the plight that Yeon-soo has gotten into because of Min Seo-rin. Her life at work becomes very complicated.

A theorist who holds an art degree. He is a cynic with a lot of pride. Having a difficult personality, he is inconsiderate, mean, and selfish. He only focuses on his own work. He is well-studied in art and has extensive knowledge of art pieces from different periods. One time, he even urged a dying painter with liver disease to have a drink if it would help him finish his last masterpiece. This is how obsessed he is about art. He likes to get into arguments with art speculators who have no appreciation of art. Because of his abrasiveness towards prospective clients, he gets into a lot of face-to-face arguments with Min Seo-rin, whose mantra is the client is always right. Min Seo-rin relegates him to oversee the new employee training program. Yeon-soo who causes problems and asks far too many questions to his liking annoys him. But he opens up as a person after meeting her. And one day, he finds himself attracted to her...

Korea's most outstanding auctioneer. Director at Hi Auction. Earning more than $100K a year at the age of 40, she looks much younger than her age and has a pretty complexion. She is the most admired woman among female college students. Any art that does not fetch a high price is meaningless to her. She prefers to handle art pieces of high value rather than art that is highly regarded in the art community. Who cares if the art collector is a man of sophisticated taste or a vulgar art speculator? A paying client is the king. She is business-minded and dislikes Oh Yoon-jae who only cares about the artistic details of art pieces. But she does have principles. She will never tolerate art pieces that have been obtained under suspicious circumstances. Even if an art piece has a high value, she won't handle stolen art or forgeries. But out of all the people she could hire, she can't believe she hired the daughter of a notorious art forger.