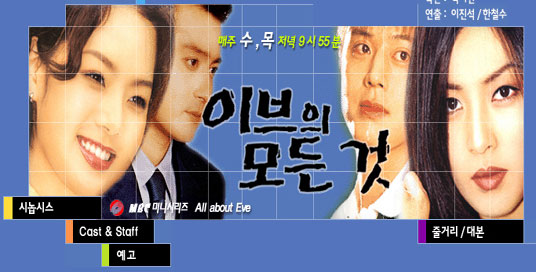 
Brief Synopsis
Sun Mi Jin (Park Chae Rim) is a lovely college student who lives with her wealthy widowed father. She has a happy childhood with her sort-of-boyfriend Woo Jin (Han Jae Suk). Life changes radically for Sun Mi when her father decides to support Young Mi Huh (Kim So Yeon), a beautiful girl the same age as Sun Mi.

Young Mi suddenly becomes an orphan when her father, an alcoholic who frequently abused her, dies in an accident while working for Mr. Jin's construction company. Young Mi has grown up in poverty, but she is not a humble person. She's arrogant, greedy and full of resentment. She envies Sun Mi for all she is and has, even Woo Jin's love.

Young Mi becomes Sun Mi's rival in every aspect of her life. First, Young Mi steals Woo Jin from Sun Mi, then tries to take over her job at a very important TV network and finally puts her eyes on Sun Mi's new boyfriend, Hyong Chul (Jang Dong Gun) one of the network's top executives, whom Sun Mi met during a trip to London. But Hyong Chul's love for Sun Mi is stronger than Young Mi's estimation. Meanwhile Woo Jin suffers of a broken heart as Young Mi makes his life miserable and finally dumps him so she can chase Hyong Chul.

The climax of the plot comes when a former lover of Young Mi appears and threatens to reveal her deepest secret should she not return to him: a dark past as a prostitute. Since the mischievous gangster did not succeed in his attempts, he decides to kill Young Mi. Woo Jin dies while saving her life. However, all of Young Mi's treachery is exposed and she attempts to commit suicide, but her efforts are frustrated when she is found unconscious by a group of nuns on the shore of the Han River. When Young Mi wakes up she suffers amnesia and has lost almost all memory of her past.

The drama ends with a happy reconciliation between Young Mi and Sun Mi, who cries beside Young Mi asking forgiveness for the misunderstanding between them since they met. Finally Hyong Chul swears eternal love and proposes to Sun Mi right in the middle of a street.