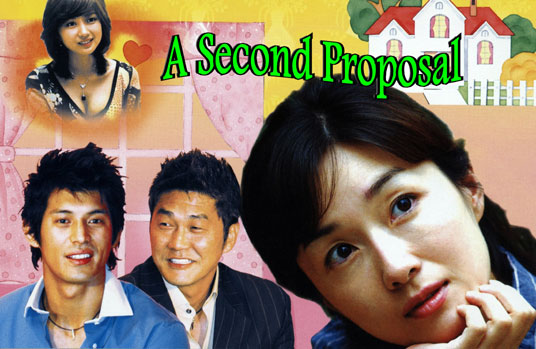 For KBS Photo Gallery from this drama : http://www.kbs.co.kr/drama/2ndpropose/photo/photo/photo.html

1) A heart-warming success story of a housewife, which gives catharsis to the housewives in their 30s or 40s.

Mini-series dramas have been dominated by trendy dramas, which can appeal to the audience in their 10s or 20s. Amidst the flood of trendy dramas, some programs such as ‘Ajumma (meaning married women with kids in Korean)’, ‘Men in crisis’ and ‘Ladies in my neighborhood’ could attract the viewers in their 30s and 40s. It is because they adopted the topics which can always trigger interest anytime anywhere.'A Second Proposal' shows happenings often found around us in daily lives, but looks at the family issues from a different perspective. It approaches the traditional family problems such as love, marriage and affairs from a light but comic and touching way.A housewife who was regarded as an ugly duckling will be transformed into a graceful swan. How she makes the transformation will be the main theme, and her success story will deliver the sense of satisfaction to lots of housewife viewers in Korea, who are thought powerless but actually are strong. There are many twists and turns in the story. The unique deployment of the drama with unexpected surprises will attract male viewers as well.

2) Reality-based drama. The time has gone when an unrealistic Cinderella story involving a successor of a rich tycoon or the dates of a long-legged beauty and handsome guy can keep the viewers coming back.The eye level of 'A Second Proposal' was set at the daily life, so that affairs, separation and divorce, which are everyday matters in life, become the major topics of the drama. Plus a tasteful fantasy will be added as a spice, setting a delicious dinner table for viewers. Watching the program, housewives as a powerful viewer group will think that it could happen to them.

3) Heart warming story. 'A Second Proposal' is a typical TV drama with the moments of touching, fun and unexpected twists. As always, however, the power of being typical is great. The synopsis of the drama seems a same old story, but the story will unfold in a speedy and cheerful way.

Things that are easy to miss but should not be lost will be depicted in the drama. The situations and problems are not that peculiar, so that the audience can believe that they can occur to ‘them’ as well. Against this backdrop, the nature of humans can be looked at in a comic manner, and the sympathy from viewers can be derived. The fundamental mood of the drama is that although harsh, living together, the world is still worthy to live. The drama has a warm attitude toward the world. Based on this, we will let the drama viewer laugh and weep together