Younha to hold concerts in Korea in Oct and Nov 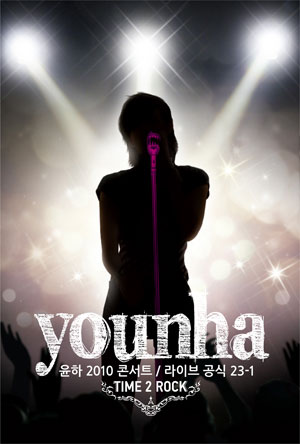 
Korean songstress Younha will be holding four concerts in Korea next month and November.

According to the official website of Lion Media, the 22-year-old singer's agency, Younha will kick off her series of concerts titled "TIME 2 ROCK" in Seoul starting with two shows in Seoul at the AX-Korea located in Gwangjang-dong on October 30 and 31.

She will then head off to the city of Daegu for her show to be held at the Grand Hall of the Chunma Arts Center on November 13 and visit Busan the following weekend for her last concert at the KBS Hall.

Younha made her debut at the young age of 16 in 2004 in Japan where she earned the nickname 'Oricon comet' after becoming the second Korean artist after BoA to break into the top 20 spots of the prestigious Oricon chart.

The singer-songwriter has dominated local music charts as well with her hit songs "Password 486," "Comet" and "Telepathy."