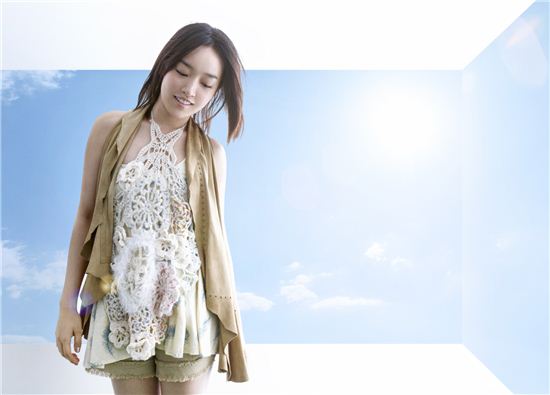 
'Oricon comet' Younha's second Japanese studio album will be out next month, her first full-length release in five years.

The 22-year-old singer's agency Lion media said on Wednesday that "(Hitotsu Soranoshita)", translated into 'under a single sky,' will go on sale in Japan on September 22 and in Korea a week later.

The new album will contain a total of 12 songs including eight new tracks and four existing singles while a limited number of DVDs will contain five music videos.

Of the songs in the upcoming record, "(Soratomo Soraomiagete)," meaning 'look up into the sky,' has been picked as a supporting song for Weathernews Inc., the world's largest private weather service company in the world based in Japan.

The music video for the song can be viewed at http://weathernews.jp/solive24/sorauta/

Younha owes her nickname to her success on Japan's prestigious Oricon chart -- she became the second Korean, after BoA, to break into the top 20 spots of the chart.

Younha has released a total of eight singles in the country as well since her debut at the young age of 16 in 2004.

She has also led a strong singing career in her home country where she debuted two years later, holding numerous hits under her name including "Password 486," "Comet" and "Telepathy."