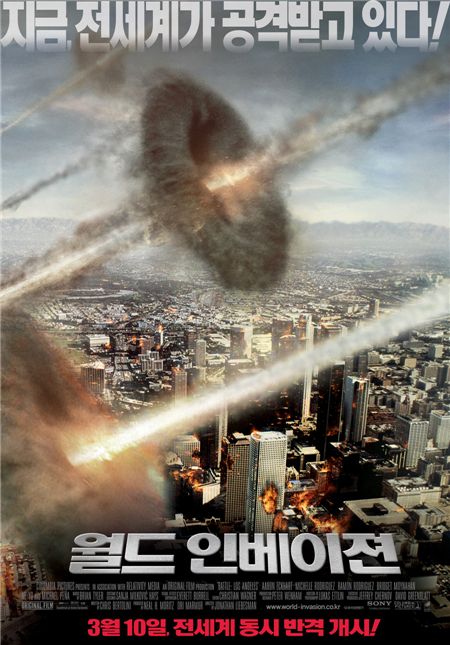 "World Invasion," starring Aaron Eckhart, Ramon Rodriguez and Cory Hardrict, about the Earth being attacked by extraterrestrial beings, attracted 254,991 viewers during the three-day weekend after opening in 494 theaters last Thursday.

"Black Swan," the previous winner of the chart starring Natalie Portman as a ballet dancer who starts losing her mind trying to immerse into her role on stage, took second place after collecting 191,156 audiences in 351 theaters.

A local romance titled "Shotgun Love," that premiered last Thursday, debuted on third place after drawing in a total 140,683 viewers in 347 theaters.

"Shotgun Love," that has Lim Chang-jung and Kim Gyu-ri as the main leads, is a romantic comedy about So-yeon (Kim), a popular fashion model in TV Home Shopping Channel seducing her co-worker Sang-yeol (Lim) to marry her after finding out that she is pregnant with a child of her ex-boyfriend.

Other films on the chart for the top 10 included "Late Blossom," "Rango," "The Fighter," "Children" "The Adjustment Bureau," "Detective K: Secret of Virtuous Widow," and "the King's Speech."