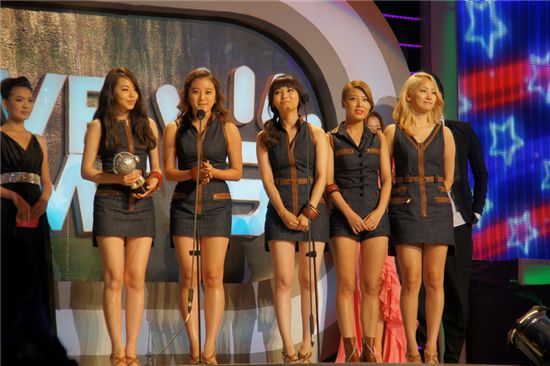 
Korea's pop sensation Wonder Girls won an award at a mobile music ceremony in China over the weekend, announced their agency JYP Entertainment (JYPE) on Monday.

The girls also took part in the red carpet event and performed their hit number "Nobody" in both Korean and Chinese while other guest stars also showed up at the event including Jay Chou, S.H.E., Jane Zhang, Bibi Chou and Xiao Yaxuan.

The latest music ceremony is considered one of the biggest of its kind in the mainland region as the results is given through statistics based on the company's yearly mobile music users. As of end-2010, the firm had 584 million registered users.

"With the Korean Wave continuing to spread out far and wide, I believe such an award from country like China which is one of the key players in market in Asia, is quite meaningful," an official at JYP was quoted as saying in statement.

Wonder Girls made their debut in 2007 and has since produced a score of hit songs including "Tell Me," "So Hot" and "Nobody."

The girls crossed over into the pop market in the United States in 2009, taking the stage as the opening act for the famous Jonas brothers and releasing their debut single "Nobody," as well as holding a 27-stop tour in North America last summer.

They are currently recording and preparing for the new album in New York which is due out this summer while have been seen at various fashion shows of top designers during New York's esteemed Fashion Week and featured at the cover of some of country's fashion magazines such as May issue of Teen Vogue and July issue of Nylon magazine.