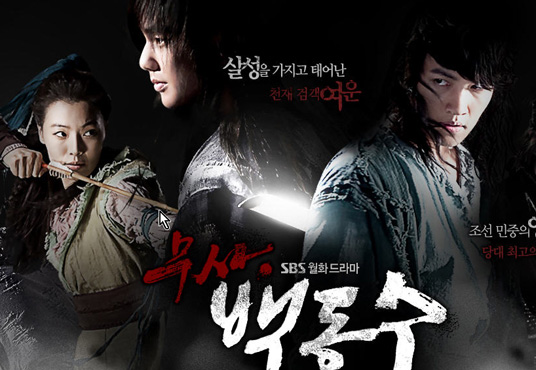 Warrior Baek Dong-soo is a 2011 SBS Historical television series in 29 episodes, premiered on July 4, 2011, and continuing twice-weekly through October 10, 2011, set in the 18th century Joseon dynasty.

It is based on the real-life story of Baek Dong-soo (17431816), one of thethree authors of Muyedobotongji, a pivotal martial arts work commissioned by King Jeongjo, and become the protector of the son of Prince Sado, King Jeongjo, along with his group. it stars Ji Chang-wook in the title role along with Yoo Seung-ho, who played Yeo-woon was Dong-soo's friend turned enemy and Choi Min Soo as the assassin lord Chun. As a political drama, the series traces the relationships between Joseon, led by King Yeongjo, the Qing empire, through its Ambassador to Joseon, the Heuk Sa Cho Rong assassin's guild, led by Chun, Ji and In, and later Yeo Woon, and the Japanese empire, represented by Kendo.

Yoon So Yi as Hwang Jin Ju, the childhood friend of Baek Dong-soo and daughter of Ji and Gwang Taek

Park Chul Min as In, the third of the three rulers of Heuksha Chorong, along with Cheon and Ji

Choi Jae Hwan as Yang Cho Rip, the third member of the trio formed by Dong Soo and Un

Kim Da Yun as Kim Hong Do, a painter and ally of Dong Soo, romantically interested in Hwang Jin Ju