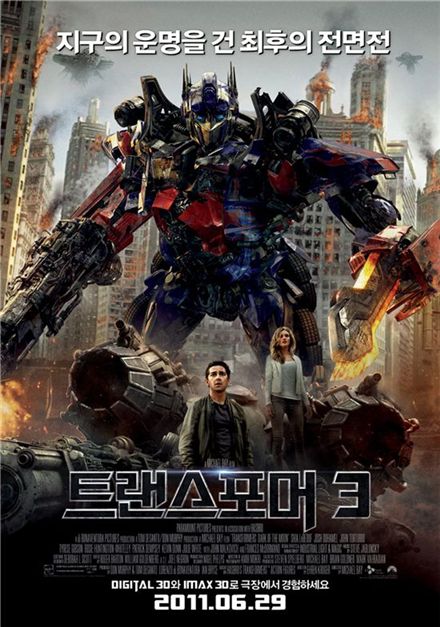 
Hollywood blockbuster film "Transformers: Dark of the Moon" set a record on South Korea's box office yesterday, becoming the most-watched foreign film in the country on its opening day.

According to the estimates released by Korea Box Office Information System (KOBIS) on Thursday, the Michael Bay action picture which opened in 1,280 theaters nationwide, attracted a total of 644,337 moviegoers on the day of its release in Korea on June 29 to surpass the previous record held by Bay's second installment of the "Transformers" series which sold about 530,000 tickets on its release date two years ago.

The latest "Transformers" movie also brought in over 650,880 viewers and accumulated over 6.5 billion won through premiere screenings held ahead of the movie's official release on Wednesday.

LaBeouf reprises his role as Sam Witwicky who helps in the fight against the Autobots and Decepticons to figure out the secret of the Cybertronian spacecraft hidden on the moon.