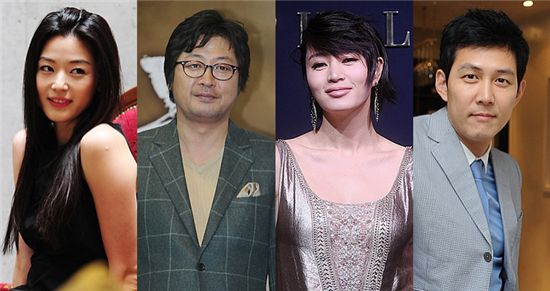 
Several high-profile actors and actresses in Korea will come together to star in a single film, according to an official related to the movie tentatively titled "Thieves."

The official told Asia Economic Daily on Tuesday Jun Ji-hyun (Gianna Jun), Kim Yun-seok, Kim Hye-soo and Lee Jung-jae are set to star in a film that will be a Korean version of Hollywood film "Ocean's Eleven" (2001).

"Negotiations for the casting had been taking place since late last year and most of the cast have already signed on or will soon," the official added.

Helmed by director Choi Dong-hoon, the upcoming pic will be about thieves from Korea and China teaming up with each other to steal a diamond worth 40 billion won locked away in a special room at a casino in Macao.

This will be director Choi's fourth feature-length film following his other crime movies "The Big Swindle" (2004), "The War of Flower" (2006) and "WOOCHI" (2009) and will crank in at May in Hong Kong and Macao.

Lee Jung-jae will play the main lead Popeye and Kim Yoon-suk his rival Macao Park while actress Kim Hye-soo will play Pepsi, a genius safe-cracker while Kim Hae-sook and Jun Ji-hyun a mother-and-daughter duo who steal jewelries and antiques.

Oh Dal-soo, known as one of the best supporting actors in the country, will show up as a Chinese thief named Andrew.

Producers are still said to be looking for an actor in his twenties to play the role of Jampano, the youngest in the group of thieves.