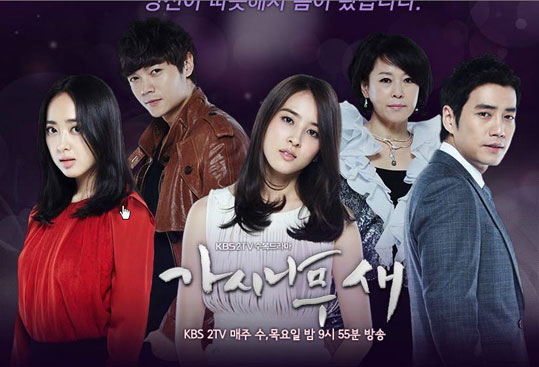 This is the story of two women, Seo Jung Eun and Han Yoo Kyung, who walk very different paths to achieve their desires. Seo Jung Eun is a strong and courageous woman who has suffered a difficult life, having grown up in an orphanage, but continues to embrace people around her despite longing for affection herself. Jung Eun harbours the hope that she will meet her mother if she becomes a star, striving to reach her goal and overcome her suffering with her pure and innocent nature. In contrast, Han Yoo Kyung has a birth secret for which she is willing to throw away everything in order to get revenge. The thorn birds of the title refers to Jung Euns character, who only brings out her best at the cost of great pain. A thorn bird is a mythical bird who searches for a thorn tree from the day it is born. When it finds it, the bird impales itself upon the sharpest thorn, and rises above the agony to sing the most beautiful song ever heard.