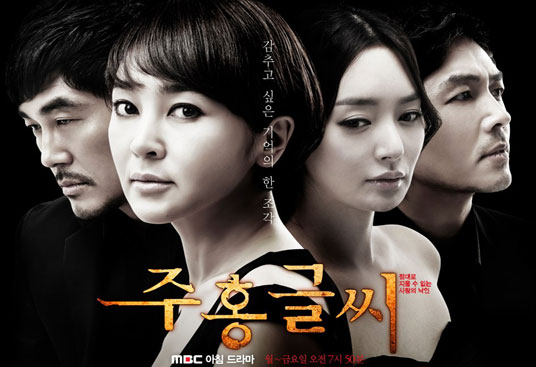 Four people paying the consequences for a love that went wrong. One woman endures poverty and a guilty conscience while the other woman plots revenge after her career takes off. Then a twisted fate brings the two women back together. Four people stained by adulterous affairs...

An aspiring writer who steals her best friend's boyfriend and then pays for it dearly in an unimaginable way. She had a crush on Jae-yong in college but her best friend Hye-lan dated him first. She meets Jae-yong one day by coincidence and they fall in love and get married. But Jae-yong is arrested and sentenced to prison later on, devastating her life. After struggling to make ends meet all by herself, she is able to change her fortunes with the help of Dong-joo who hires her as a screenwriter for his TV drama miniseries.

She is dumped by her boyfriend Jae-yong just as her acting career is about to take off. Then her brother gets into a horrible accident which takes an emotional toll on her. But she overcomes these ordeals to become a popular celebrity. She swears to get revenge on Gyeong-seo for stealing Jae-yong from her by appearing in a drama miniseries that Gyeong-seo is also working on as the lead writer.

He marries Gyeong-seo after dumping his college sweetheart Hye-lan. Then he inflicts a serious injury to Hye-lan's brother, and for that he is sentenced to five years in prison. After he is released, Hye-lan relentlessly hounds him to exact revenge but he puts up with her provocations.

A successful TV director whose debut show was a big hit. He is handsome and stylish. He's also a smooth talker who is popular with women. He then works together with writer Han Gyeong-seo on his next TV project. He is torn between Gyeong-seo and Hye-lan.