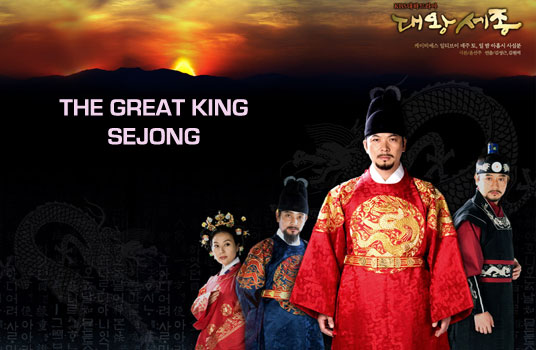 
This drama is about the life of fourth king of the Choson Dynasty of Korea, King Sejong. He is best remembered for creating the native Korean alphabet, Hangul.

A true political drama based on the politicians of the Joseon Dynasty and the clash of thier beliefs and passion.

The typical historical palace dramas usually portrayed the royal palace as a place of conspiracy, affairs and betrayals. But the great King Sejong portrays the Joseon capital as the heart and center of living politics. It draws out the many differences in political ideals and the wisdom of finding the reality and solutions to the differences. Thus, the great King Sejong marks a new era in political dramas.

Sejong, the king who went beyond limits to become a true political leader.

"The Great King Sejong" deviates from the typical hero story and focuses on the human aspects of the king. Instead of showing the 'already prepared king' like the most historical dramas, it focuses on the hard work and efforts he invested to find his own political ideals and lead a kingdom. Although he was a prince, he was not an heir to the throne. Thus his interests in politics was the same as becoming a rebel. But it was not power he wanted. He only only wish to work and bring people peace and prosperity. "Th e Great King Sejong" is a story about king sejong and his beloved followers who did not rest to establish an independent and beautiful Joseon.

Since his childhood, Sejong was very deligent in his learning and self improvement. Knowing that although nations could be established through the sword, the ruling of a nation was through writings and culture, Sejong was a king who understood the power of the pen and prepared himself by working hard to possess that power. King Sejong was decisive and courageous and through viewing his acts, the passive people of the world today will have another chance to look into themselves in their modern lives.