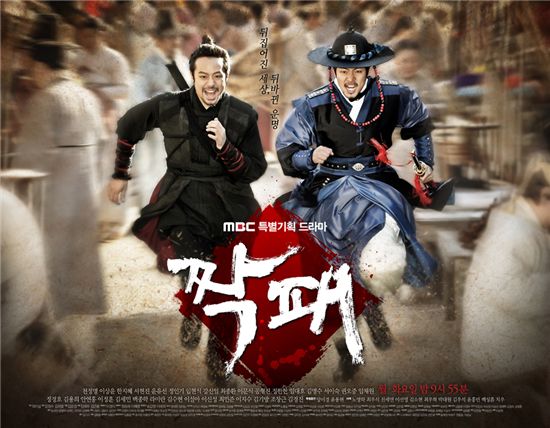 
MBC historical series "The Duo" once again scored the highest TV rating in the Mondays and Tuesdays' primetime slot, according to the findings by two media research companies on Wednesday.

"The Duo," starring Chun Jung-myung, Lee Sang-yoon and Han Ji-hye, yielded an average viewership rating of 13.4 percent on Total National Multimedia Research's (TNmS) chart and 16.7 percent on AGB Nielsen Media Research's (AGB) reports this week, both figures down by about a percent compared to last week but leading other competitors.

Kang the hunter (Kwon Oh-jung), the leader of the righteous thieves Yaraejeok that steal from rich to give to the poor, returns to town and Chun-dung (Chun) in trying to help him, gets in trouble. Meanwhile Gwi-dong (Lee) starts having doubts regarding his birth after finding out he is the only one in the family without a hereditary red spot.

SBS series "Midas" with main casts Jang Hyuk, Kim Hee-ae and Lee Min-jung, came in next after posting an average viewership rating of 10.7 percent and 12.75 percent on polls by TNmS and AGB, respectively.

Kim Do-hyun (Jang) gets investigated by a prosecutor for his past stock market scandal five years ago and Yoo In-hye (Kim) his sponsor, considers replacing him in order to continue with an M&A project.

KBS' "Detectives In Trouble" featuring Song Il-gook, Lee Jong-hyuk and Song Ji-hyo which came last among its competitors, posted an average viewership rating of 7.1 percent on TNmS' chart and 7.45 percent on AGB's poll.

This week's episode portrayed inspectors trying to capture the one who killed the cosmetic surgery doctor.