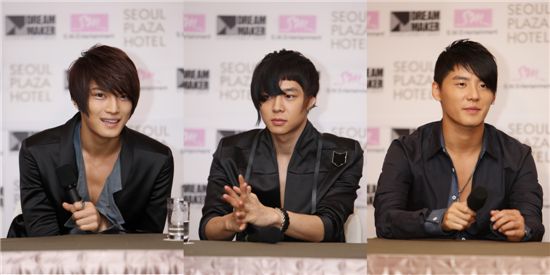 According to the Seoul Central District Court on Monday, the three singers brought suit against SM, demanding that they be confirmed their 13-year exclusive contract with the agency had been nullified, along with one billion won each, part of their share of profits they claim to have failed to receive.

The three had applied for provisional disposition of their contract with SM last July, saying it was too long and unfair, to which the court ruled in partial favor of, stating that SM cannot interfere with their individual activities.

This led to a halt of their activities as a five-man band in Korea and a few months later in Japan. The three then formed a separate group, signing with Japanese agency AVEX, through which they declared they would pursue their singing careers.

After giving a series of sold-out concerts in Japan just two weeks ago which they held to "express gratitude to fans," the new trio have been gearing up for their debut which is set to be produced by prominent U.S. musicians Kanye West and Timbaland.

Meanwhile, SM too had sued the three singers in mid-April in a suit worth 2.2 billion won for the damages the agency and the remaining two members, U-Know Yunho and Max Changmin, have suffered from the legal battle.

Since their 2004 debut, TVXQ, discovered and managed by SM, had arguably been one of the most successful K-pop acts in Asia with reportedly the largest fanbase in the world.

Enjoying great success in the Japanese music industry in particular, they became the first foreign artist to top the Oricon singles charts six times and placed their single and album simultaneously within the top three slots of Oricon's singles and albums chart, the first time for a foreign artist to do so in 15 years.