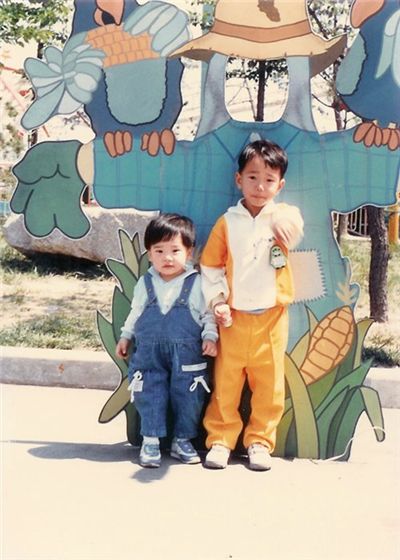 
Super Junior member Yesung has revealed a childhood picture of his brother and himself.

The singer uploaded the photo on his official Twitter page yesterday, in which Yesung is seen wearing yellow gym clothes and standing next to his younger brother with a comment saying, "My younger years with my little brother ^^."

Fans who have seen the picture have left responses such as. "You look so lovable" and "The two of you are so adorable."

Yesung, whose real name is Kim Jong-woon, was discovered and trained by SM Entertainment, one of the biggest talent agencies in Korea.

He made his debut as one of the lead vocalists in the 13-member boy band Super Junior. The group has released numerous albums and hits song including "Show Me Your Love," "Don't Don," "Sorry Sorry" and "BONAMANA."

Yesung has recently been cast to play one of the male leads in upcoming musical "Spamalot." He has starred in two other musicals including "Namhansansung" and "Hong Gil-dong" with group member Sungmin.

Yesung is also currently taking part in the "SMTOWN LIVE '10 World Tour," alongside other SM artists, which kicked off in Seoul last weekend. The next show will be at the Staples Center in Los Angles on September 4.