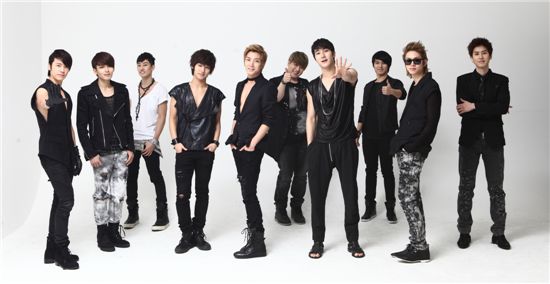 
Super Junior's song has topped a top Taiwanese music chart for 34 weeks straight, according to their agency SM Entertainment on Tuesday.

A press release by SM said that Super Junior's song "BONAMANA, the title track to their fourth album, took first place on Taiwan's major online music site KKBOX's Korean Music TOP 100 chart during the week of January 16 to 22, maintaining the top spot on the chart since June 6 of last year.

The chart was originally named the Korea-Japan TOP 100 Chart but KKBOX separated the chart for the two countries starting this year due to the high popularity of K-pop.

"BONAMANA" has also topped the KKBOX's monthly chart for straight seven months from June to December of last year, as well as its yearly 2010 chart.

Super Junior had already enjoyed similar success with "Sorry Sorry from their third album which dominated KKBOX's music chart for Korean and Japanese music for 36 weeks in a row and another 34 weeks on ezpeer.

Super Junior, often referred among fans as "SuJu in short, debuted in late 2005 as one of the largest boy bands in the world but have recently been promoting themselves with just 10 members. Kang-in is serving his mandatory military duties, Kibum will be focusing on his acting career and Hangeng is currently embroiled in a legal battle with SM.

Nevertheless, the boys have been one of the most popular K-pop acts in the Asia region with numerous hit songs such as "Don't Don" and "Sorry, Sorry" under their belt.

The group will take part in their agency's joint concert "SMTOWN LIVE in TOKYO" set in Yoyogi National Stadium in Japan today and tomorrow.