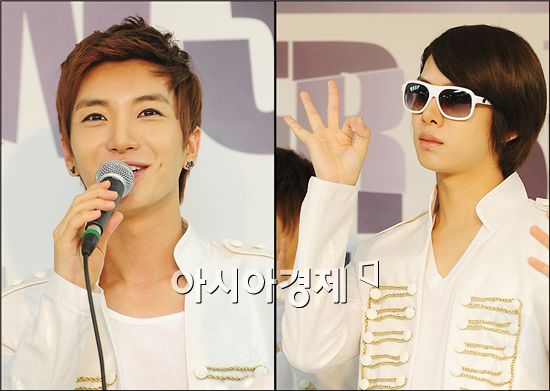 
Boy band Super Junior members Heechul and Lee Teuk got involved in a seven-way collision in Singapore last week but have emerged unhurt from it.

The two had flown into Singapore on Friday, earlier than the rest of their band's members to take part in their Asia tour "SUPER SHOW 3" in the country over the weekend, when they were chased from the airport by fans following them in a taxi and it ended up running into the boys' van after which five more cars following behind collided as well.

An official at Super Junior's agency SM Entertainment said both members are okay and they were able to perform at the concert's Saturday and Sunday show held at the Singapore Indoor Stadium.

She added however, that they will undergo examination at the hospital upon their arrival in Korea today in case the singers suffer from aftereffect.

After the accident last week, Lee Teuk had written on his Twitter account, "I'm in Singapore and it seems like a beautiful country. And it's okay following our car but please be careful. A seven-way collision. We almost died."

Kim Heechul wrote, "Now now, to the performing venue if you want to see us. Everyone will be put in danger. I'm hoping I'll never again have to see my life whip through my mind like a flash."

Lee Teuk, 27, is the leader of Super Junior which made its singing debut in 2005 with album "SuperJunior05 (TWINS)."

Heechul, also 27, first started out in the entertainment business with a role in KBS' teenage drama "Sharp 2" in 2005 and then began his singing career through Super Junior.

Both have played several small screen roles as well as hosting variety and radio programs outside of their group activities.