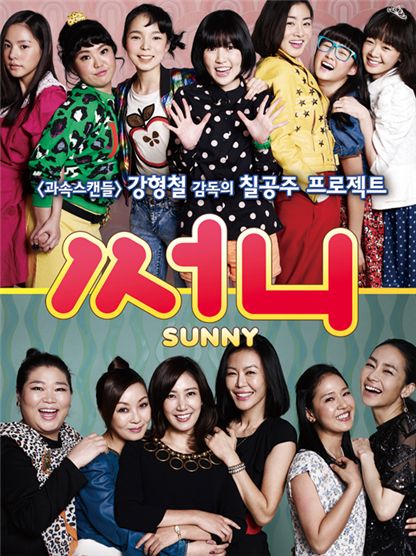 
Korean film "Sunny" bounced back to top spot of the weekend box office during the final weekend of June, revealed the Korean Box Office Information System (KOBIS) on Monday.

According to KOBIS' statistics, "Sunny" was ranked at first place on the latest weekend box office after bringing in 328,511 audiences over the weekend to some 650 theaters nationwide.

The film which has accumulated over 5.7 million viewers so far, remained atop weekend box office for the first three weeks of its opening since May 4 and had stayed at second or third place on same chart for the five weeks that followed before winning its crown back.

Starring Yoo Ho-jeong, Sim Eun-gyeong and Jin Hee-kyeong, the film which looks in to some of the memorable moments of teenage years for girls in Korea in the 80s, begins with one middle-aged woman's efforts to contact her old friends after coming across one of them who is dying on cancer.

Previous chart topper "Kung Fu Panda 2" which had remained atop the weekend box office for the past three weeks, went down a notch to take second place on the chart after selling total 240,090 tickets in 291 theaters during the three-day session.

"Kung Fu Panda 2" which is the second installment to DreamWorks' previous animation "Kung Fu Panda" (2008) stars Hollywood celebrities such as Jack Black, Dustin Hoffman and Angelina Jolie as the voice actors and tells the story of a kung fu-trained panda and his five animal friends who set out on a challenge to defeat an evil emperor who tries to put an end to all kung fu practice.

This film produced and written by critically acclaimed director Kim Ki-duk, and directed by his pupil Juhn Jai-hong, tells a story of a man referred to as "Poongsan," who can move swiftly through the borders of North and South Korea to deliver messages and goods in just three hours' time. The story starts when one day he is given a special mission to bring one woman, the lover of high-ranking defector from North Korea.

Other films ranked from fourth to tenth place were "X-Men: First Class," "White," "Super 8," "The Lincoln Lawyer," "Legend Of The Fist: The Return of Chen Zhen." "Green Lantern," and "Green Days."