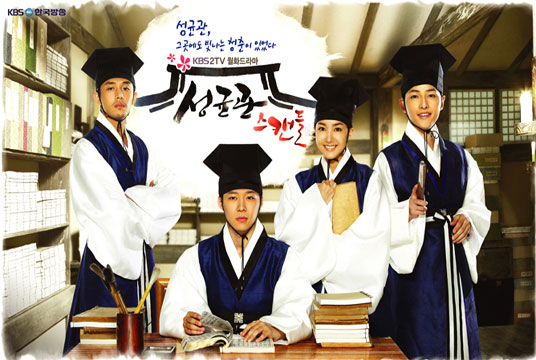 This drama is set in Sungkyunkwan University during the Joseon era, revolving around the exploits and love stories of four youths. When her younger brother falls ill, Kim Yoon Hee enters the school in his place disguised as a boy in her desperation to find a way to support him, and becomes friends with Lee Sun Joon, extremely rich and the brains of the gang, playboy Goo Yong Ha and the rebellious Moon Jae Shin.

Nation's highest educational institute and the oldest university in East Asia that has distinguished history of 500 years; it is Sung-kyun-kwan University. But if you are thinking of Sungkyunkwan as a boring study place, you underestimated it.

It is the place full of vitality, where youthfulness is flowering, and the school where you learn to be harmonized! And there is a young Confucian scholar Kim Yoon-hui, who gets into this forbidden place for women, hiding her gender. Yoon-hui's father, Kim Seung-hyun was a scholar at Sungkyunkwan and also a good friend of the Crown prince. King Yeongjo calls him before the day of his death and asks him to hand down his secret book Kum-deung-ji-sa across the generations. However, Kim Seung-hyun gets killed by the opposing faction and the book has disappeared. Yoon-hui was only 7-year-old when her father got murdered. Yoon-hui has a talent for writing, which had inherited from her father. She starts to stay at Sungkyunkwan and meets three good friends: Seon-joon, Jae-sin, Yong-ha. Yoon-hui slowly gets fascinated by King Jeongjo's vision and becomes to understand what her father truly dreamt of.