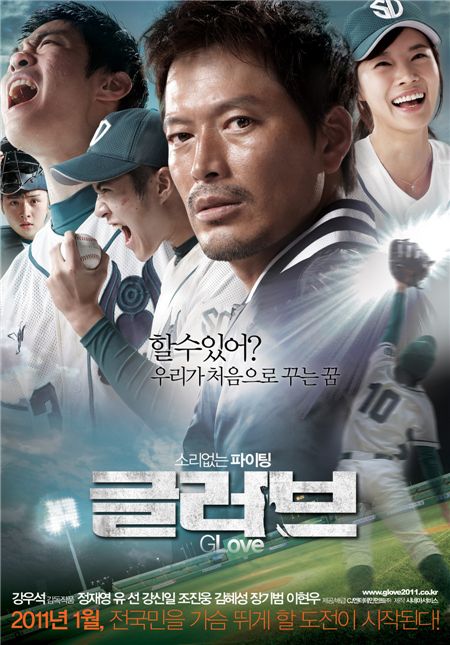 The new film drew in a total 471,776 viewers during the three-day period after premiering in 667 theaters nationwide on January 20.

"Glove," starring Jeong Jae-yeong, Yoo Sun, Kang Shin-il and Cho Jin-woong, is based on a true story about a group of high school baseball players from a school for the hearing-impaired aiming for their first national win.

Actor Jeong plays a pro-baseball pitcher who gets ousted from his team from misbehaving and in the meantime, is given a last chance by having to coach the hearing-impaired team.

DreamWorks' 3D-anmation "Megamind," the previous week's winner, was pushed down to second place after selling 204,265 tickets for the past three days.

The film starring the voices of Brad Pitt, Will Farrell and Jonah Hill, is about super villain Megamind who, after getting rid of his arch enemy Metro Man, creates a hero to fight him, purely out of boredom, only to see the tables turn to realize it is now his task to save the day.

Korean comedy "Hello Ghost" took the No.3 spot on the box office for the third time after bringing in 150,752 movie-goers this weekend.

Starring Cha Tae-hyun and Kang Yae-won, "Hello Ghost" is a comedy about a guy who starts seeing four ghost -- a pervert, a chain smoker, a crying woman and a child -- that will not leave his side until he grants them their wish.

The film has been remaining strong on the box office since its premiere in late December last year, having shifted back and forth between second and third place for straight five weeks to accumulate over 2.9 million viewers so far.

Other films that appeared in the top 10 of the latest chart were: romance flick "Love & Other Drugs," fantasy action "Season of the Witch," family and action "Heartbeat," slapstick comedy "The Last Godfather," fantasy adventure "Magic Journey to Africa," Japanese animation "The Adventures of Hutch the Honey Bee" and documentary "Don't Cry For Me, Sudan,"