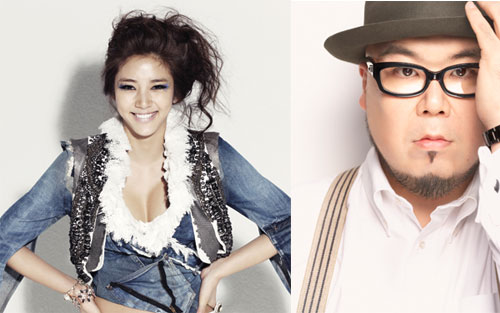 
Korean songstress Son Dambi has recorded a digital single with world-renowned Japanese music producer FRM, according to her agency Pledis on Monday.

A press release by Pledis said that Son Dambi did a featuring for FPM's (Fantastic Plastic Machine) new digital single "One Kiss," a song with strong melody and fast, rhythmical beats, which was released on major Korean music providers including MelOn, Bugs and Soribada.

The statement explained that the latest collaboration was arranged upon request by FPM himself who believed that Sons "powerful and sexy performance and voice" will go well with the club music he was planning to create.

The song is part of FPM's "K.O. Sound Compilation Series," a project between worldwide and Korean artists where four songs are created every year to increase music exchange between countries.

Son and FPM's new song will be included in the second volume of "K.O." -- the first volume which went on sale last year featured Korean R&B singer Bobby Kim and singer Double K.

FPM himself is a famed music producer of the "Shibuya-kei" in Japan who has worked with high profile singers from both at home and abroad including Amuro Namie, Fatboy Slim, BoA and TVXQ.

Son, 27, began her career in the entertainment industry with appearances in commercials before jumping into the music business. After training with famous American choreographers she released her debut single "Cry Eye" in 2007 and has released three mini-albums and a full-length album to date.

She is also well known in Taiwan due to the success of her first EP album "The Queen" released earlier in country and the popularity of Korean TV drama "Dream" (SBS, 2009) and claimed the prize for foreign artist with best stage presence at a fest hosted by cable music channel Channel [V] Taiwan.