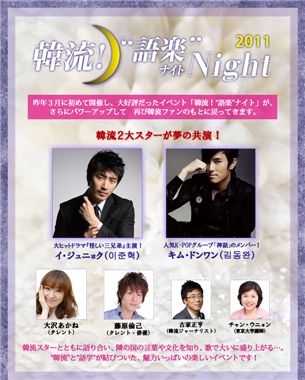 
Singer Kim Dong-wan of male band Shinhwa is set to appear on Japanese broadcaster NHK's program to introduce the Korean language and culture this coming March.

According to NHKs website for language class (gogakuru.com), singer Kim Dong-wan will take part in the 2011 Hallyu! Language Rock (??) Night set for March 18 to give special demonstrations on Korean language and songs.

Hallyu! Language Rock Night is NHKs most popular Korean language program among Hallyu fans in Japan that teaches the language via popular hit scenes and dialogues from Korean dramas.

Kims local promoter Liveworks Company explained that Kim will proceed the language class himself as he is quite fluent in Japanese. NHK's website added that Kim will also sing Korean songs live on stage.

Other celebrities that will join Kim are Japanese actors Akane Osawa and Tomoki Fujiwara, and Korean actor Lee Jun-hyuk who appeared in SBS Stars Lover (SBS, 2008) as actress Choi Ji-woos bodyguard and recently as one of the main characters in The Three Brothers (KBS, 2009).

Kim, 31, who debuted in 1998 as a vocal to six-member male band Shinhwa, gained wide popularity with the group throughout Asia and has released solo albums for himself.

He then branched out to other aspects of the entertainment business, appearing in several dramas including "Goodbye Sadness" (KBS, 2005) and "My Dearest Love" (SBS, 2007) and movie "Spin Kick, Taekwon Boys" (2004).

Having completed his two-year mandatory military duty last month, Kim plans to resume his activities in both Korea and Japan starting with variety shows at home.