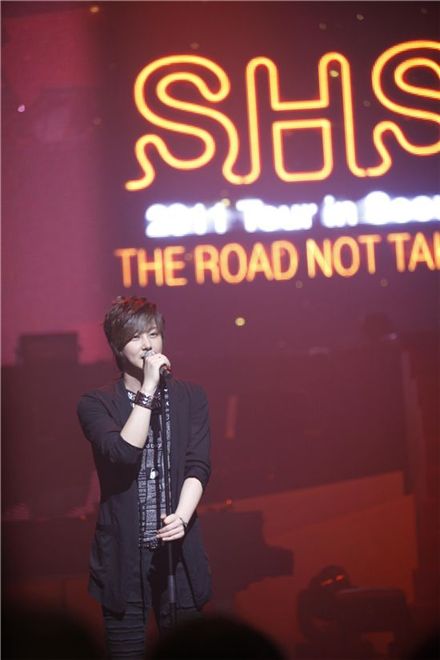 
Korean singer Shin Hye-sung wooed some 4,000 of his fans in Korea over the weekend, performing a number of his past and new songs at the first leg of his Asia tour.

Shin's concert, his first in Korea after six months celebrating the release of his latest album "THE ROAD NOT TAKEN," titled "SHIN HYE SUNG 2011 Tour in SEOUL-THE ROAD NOT TAKEN" held at the Chungmu Art Hall in Seoul from June 24 to 26, kicked off on Friday with a video montage of photos of the singer followed with his first song "Think About It" from his latest album.

He then pumped up the crowd with a seven-piece band for songs "Because It's You," "Still" and "Island" as well as singing "What My Eyes Tell You" from the soundtrack of SBS' TV Series "Gourmet" and "Purple Rain" with a four-piece wind ensemble.

The singer also performed his title track "Tik-tok, Tik-tok" from his new full-length release, as well as "Special Love" and "A Little Bit Closer," while the show also featured guest appearances by female R&B group Eye To Eye, Brown Eyed Soul's Young-jun who worked with Shin on the aforementioned song and ballad trio 4MEN.

He then made the announcement that today's show was the start of his concert tour saying, "I have plans to visit Busan next month and then promote my album and meet with fans in Asia including China and Japan."

The three-hour long concert ended with songs "Catching Stars" and "Gone Today" and he surprised fans with encore performances with "Same Thought," "The Present" and "Ex-mind."

Shin made his debut as the main vocalist in six-member boy band Shinhwa in the 1998. They were known as one of the most popular groups in the late 1990s after which Shin began his solo singing career in 2005.

He has produced a number of albums and hit songs as well as held a number of concerts and fan meetings overseas. Shin recently made his return to the local music scene with his fourth full-length album "THE ROAD NOT TAKEN" his first album in the country in over two years. 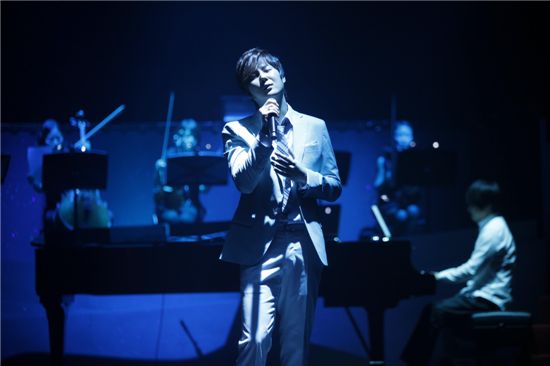