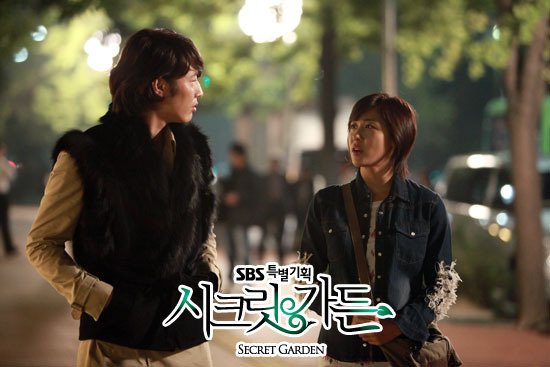 The drama tells the story of Kim Joo Won (Hyun Bin), a seemingly perfect man yet with certain arrogance and childishness in him, and Gil Ra Im (Ha Ji Won), a stuntwoman whose beauty and body are the object of envy of top actresses. One day they went deep into the mountains and entered a strange house. A strange grandmother offered them chocolate to eat. The next day they found themselves changing bodies.

The House He Lives In

The house actors Yoon Sang-hyeon and Hyeon Bin's characters live in on the set of SBS TV series "Secret Garden" at the Maiim Vision Village in the Gyeonggi Province of South Korea on December 8, 2010. [Lee Jin-hyuk/10Asia] My name is Kim Ju-won, I am 33 years old, and my occupation is to be rich. I believe that just about explains who I am. Any misunderstandings that could occur between me and the penniless, underprivileged person like you is usually not from lack of information but the difference in level of thinking between us that has been set since birth. But just because I own a large house and a garden that covers over 66,000 square meters of land, that does not mean I'm a rude person. You would notice that by me giving permission to the crew of SBS for drama "Secret Garden" to film in my house, as well as the room of Choi Woo-young, whom you better know as Oscar. Maybe you'll realize it one day, later on. You may end up saying, "Oh my~ I can't believe I went to Yeoju Mime Vision Village tour with 'him', such an honor for generations to come!"But let me make few things clear and I'm not telling you this just for your benefit. This is all part of the morales of the social upper class. You know, like a generosity for the needy. It's all part of my excellent upbringing. They say in the papers that I am the symbol of Korea's noblesse oblige and the only hope. I'm not sure about that but they can't be saying that without reason to, can they? What? No? Would you like to meet my lawyer?