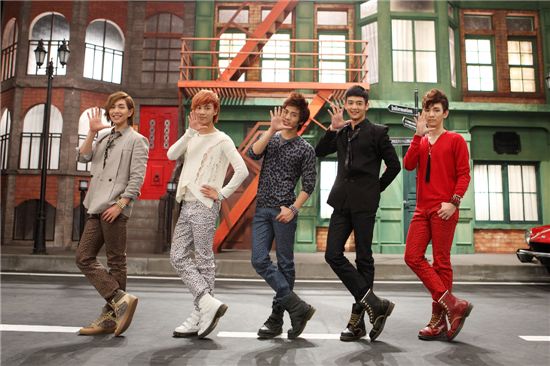 
Korean idols SHINee have revealed the full-length music video for their title track, according to their agency SM Entertainment on Tuesday.

SM announced that the boys music video for their title track "Hello," from their second repackaged album of the same name, was uploaded on their official website (http://shinee.smtown.com) and YouTube channel (www.youtube.com/sment) yesterday.

The video features the five members preparing to confess their love and a one-minute introduction and outro of "A Child's Mind" by jazz pianist Song Kwang-sik.

The boy band recently gave their comeback performance for "Hello" on KBS' televised music show "Music Bank" and will continue to promote the track this weekend on other music programs.

"Hello," based on the album "LUCIFER," features 13 tracks from the record as well as the title track "Hello" and two more new songs.

SHINee was discovered and trained by major talenthouse SM Entertainment in 2008. They have produced various hits including "Replay," "Older Girl You're So Pretty," "Ring Ding Dong" and recently "LUCIFER."