SBS "Sign" steps up to 1st place among primetime dramas 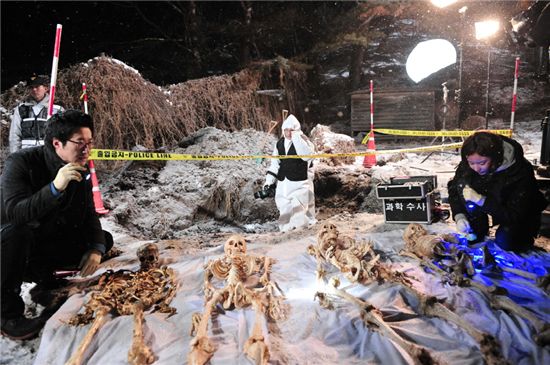 
SBS' medical suspense drama "Sign" emerged a winner on this week's primetime TV ratings chart for Wednesdays and Thursdays, according to the results of two media research surveys on Friday.

Starring Park Shin-yang, Kim A-joong, Uhm Ji-won and Jung Gyu-woon, "Sign" scored an average viewership rating of 15.75 percent on Total National Research Media's (TNmS) poll and 17.65 percent on AGB Nielsen Media Research's (AGB) listing, both figures an improvement of about one percent from last week. This is the first time in two weeks for "Sign" to take the win.

This week's episode featured multi-plots in which Yoon Ji-hoon (played by Park) and his assistant Ko Da-kyung (Kim) flew to Hiroshima, Japan to confirm the identity of an unknown skeleton presumed to be a young Korean girl who died there during the times of World War 2 while back in Korea, female prosecutor Jung Woo-jin (Uhm) and inspector Choi Yi-han (Jung) get entangled in the case of a shooting spree between gang members.

MBC's "My Princess" went down in ranking from last week, posting an average viewership rating of 14.3 percent on TNmS' chart, about a one percent drop from last week and on AGB's chart, 16.5 percent, which is a three-percent plunge.

"My Princess" starring Kim Tae-hee and Song Seung-heon is about a ordinary college girl Lee Seol (Kim) who finds herself to be the lost descendant to the last royal family of Korea.

In this week's episode, Lee resolves to become strong in order to restore the honor of her real father as well as that of her adopted family who raised her and announces that she will re-do the ceremony that declares the launch of foundation for imperial family.

KBS' political drama "PRESIDENT" coming in at third, yielded an average viewership rating of 6.2 percent on TNmS' poll and 7.65 percent on AGB's poll, showing not much change in general performance.