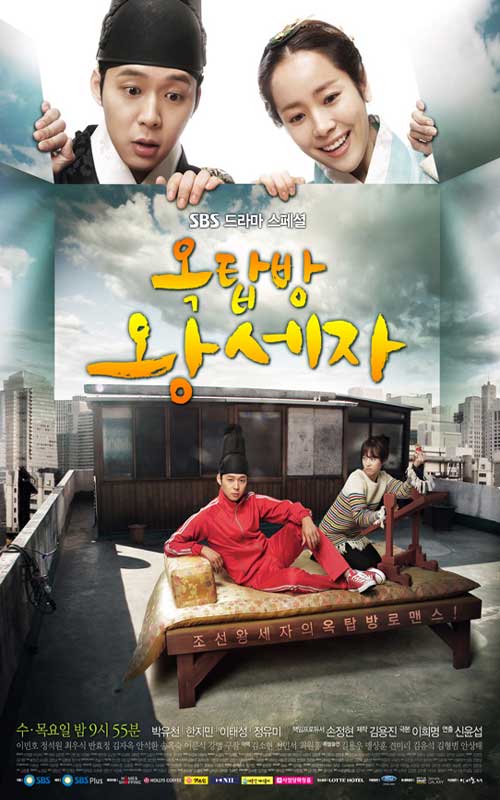 Korean drama, Rooftop Prince is based on theme of time-travel.

Lee Gak (Micky Yoochun) is the Crown Prince. When he is ready to marry, Lee Gak wants to marry a beautiful woman. Bu Yong (Han Ji Min) and Hwa Yong (Jung Yoo Mi) are sisters. Hwa Yong, the older sister wants to marry Crown Prince Lee Gak, but her father makes it clear that younger sister Bu Yong will marry the Crown Prince. Hwa Yong is so upset, she uses an an iron to burn Bu Yong's face, pretending it was an accident. Now, Bu Yong carries a big scar on her face. Eventually, older sister Hwa Yong marries Crown Prince Lee Gak. Time passes and are now adults. Younger sister Bu Yong is now a smart woman, good with needlework. Older sister Hwa Yong is uneasy that her husband, Crown Prince Lee Gak, and Bu Young get along well. One day, Crown Prince Lee Gak wakes up in the early morning. He finds that Hwa Yong is not next to him. He feels something strange about the situation and calls for an eunuch. At this time, an eunuch comes running to the Crown Prince and informs him that Hwa Yong is found dead in a pond. Lee Gak suspects that his wife's death is not by accident. He puts together a team to investigate his wife's death. When the team awaits to interview a witness, a group of assassins appears and chases them. Crown Prince Lee Gak and his men are chased to the edge of a cliff. The group jumps off the cliff. The Prince from the Joseon era travels to the future with his entourage Song Man Bo (Lee Min Ho), Woo Yong Sul (Jung Suk Won) and Do Chi San (Choi Woo Shik).

When Park Ha (Han Ji Min) was young, her father remarried and Park Ha gained older step-sister Se Na (Jung Yoo Mi). When their parents left for work, older step-sister Se Na despised having to take care of her younger sister. One day, while younger sister Park Ha sleeps inside a truck, the truck suddenly departs. Even though Se Na sees the truck leaving, she turns around and pretends that it isn't happening. Time passes, younger sister Park Ha is now living in America. While, Park Ha sells fruits as a sidewalk vendor, Yong Tae Yong (Micky Yoochun) sees her and feels a connection with Park Ha. Yong Tae Moo (Lee Tae Sung) appears in front of Yong Tae Young. They are cousins. The following day, the two men boards a yacht. While the boat is sailing, they have a small fight and Yong Tae Yong falls into the water. His cousin doesn't attempt to save Yong Tae Yong and actually attempts to hide evidence that he was there. He then jumps into the water and swims away. At this time, younger sister Park Ha receives a phone call that her family has been located in South Korea. Park Ha travels to South Korea and learns that her father has just passed away. At her father's funeral, Park Ha meets her step-mother and older step-sister Se Na. Park Ha has no memory of how she was separated from her family. Park Ha settles down in Seoul. One night, when she comes back to her rooftop room, she discovers four men, in Korean traditional clothing, sitting in her room.