Rain says "Love Song" based on own experience - Part 2 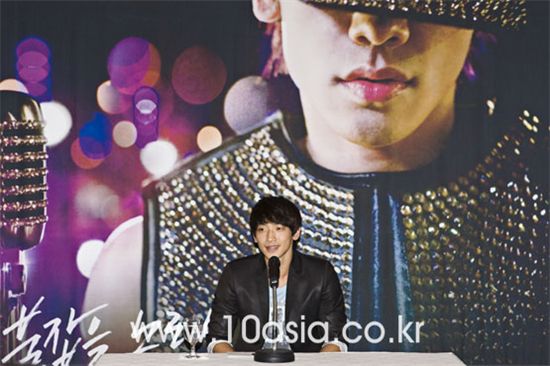 10: How long will you promote your album and do you have any plans on appearing in variety programs?
Rain: Since my debut I had received lots of love through variety programs. I want to show everything that I can while promoting this album because I intended on going back to my original resolution and work hard on this release. As long as the audience don't feel uncomfortable about it, I want to be in as many variety shows as possible. I plan on promoting my album for about two months before I begin shooting a drama and movie. I have an upcoming tour in Japan so I will be visiting several cities in the country but I think I'll be able to manage both by going back and forth till early May.

10: Your last album received a parental advisory label due to the title track containing suggestive lyrics. I don't think the lyrics for this album will be much of a problem. Were you considering possible problems?
Rain: I didn't think there were any suggestive lyrics in "Rainism" but others may have thought otherwise. Honestly, I had a hard time because of that but that doesn't mean I would intentionally make the lyrics nicer. I made this album two years ago and I believe that the listeners will love the song.

10: Where did you get the inspiration for the lyrics of "Love Song?"
Rain: It's all from my own experience. I wrote the lyrics to the song thinking about why we love and we get hurt from love. For "Love Song," I was watching an old movie where a guy paces back and forth in front of the girl's house and I remembered that I had experienced that too so I tried writing and producing this song.

10: What was it like working with Korean actress Han Ye-seul for the music video for "Love Song?"
Rain: I am so grateful to Han Ye-seul. We asked Han last minute to appear in the video and she accepted willingly. It was a fun time while shooting the video and on set she had this ability to make those around her feel good.

10: Since your last album, you've been doing the actual writing and producing. What are some of the things that have changed?
Rain: I thought to myself that I can do actually do this too. When I was under JYP, Park Jin-young was in charge of music and I was in charge of producing what would happen on stage and selecting my next drama or movie role. But after I became independent from him, I was concerned for a long time with what kind of style I should go with. It was hard having to go on stage and put on a new type of performance that the audience would be satisfied with. That is how I came up with "Rainism." At the time I had many concerns but while studying and learning a lot, I found out that I had an aptitude for this kind of thing. In order for me to make progress, I listened to a lot of music. I think I became an adult by trying, getting hurt and scarred.

10: You mentioned getting hurt. Which scar hurt the most?
Rain: That I was weak. As an entertainer, one has to practice immense self-control and hide many things. It is important to figure out how to overcome that situation and there are times things will be difficult that you just want to quit everything. And songwriting and writing dramas are both creation but trying to figure out what to wear on stage and how the performance will unfold or what to say at a promotional event too is creation and there were times I was in agony over such things. That is why I made a habit of looking at myself in the mirror every morning. I look at myself in the eyes once a day and hypnotize myself to believe that I can do it. I think that's how I was able to develop, by winning in the fight against myself. I feel that I am becoming a stronger guy who can overcome anything.

10: The talenthouse that you set up has gotten pretty big. Your company has branched out into fashion and you manage the idol group MBLAQ. Can you tell us about the outcome so far and your future plans?
Rain: I am not part of the company's management. The company's work is managed by the CEO and I have no relations to that. I am just one of the entertainers that signed with the company who just engages in as a creative artists on the label side. That is why I was in charge of producing MBLAQ and working as a designer as well. As of now, we are planning to set up plans which will bring developments in many ways.

10: In your "VIP thanks to," you thanked CJ Group's Lee Mi-kyung and others in the financial world. What ties do you have with them?
Rain: We are like family. I was given lots of advice on many things and they were always there taking care of me or whenever I was having a hard time. Whenever there was something big going on or I was feeling bad, they were there to consult me and make me feel better.

10: Is there anything you would like to say to your fans?
Rain: I'm sorry to say this but I think my fans are entering their 30s with me. It won't be much longer until I reach that age. (laugh) That is why I feel like they are like my actual older or younger sisters and brothers. I can actually show that I am feeling lonely in front of them, as if they are family. The main reason I came back is for my fans. I wasn't trying to gain anything from it but I wanted to show my fans something before the year is over. Right now I'm in a trial and error period where some things are failures while others are successes and I feel the score right now is 7:3 in favor of success. I will work hard to make the score a lot better.